Buddhist temple to move forward with plans for new sanctuary

Under settlement, Quan Am Buddhist leaders will submit revised proposal to Garden Grove for 10,000-square-foot temple

GARDEN GROVE, CA (USA) -- A Buddhist temple will move forward with plans to build a new temple on Chapman Avenue after a settlement with the city announced Wednesday. 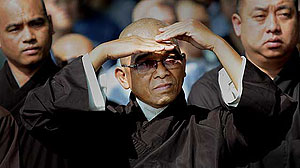 << Buddhist temple to move forward with plans for new sanctuary
EYES FORWARD: One of the monks at the Quan Am Buddhist Temple listens as the temple's abbott Thich Dae Quang speaks at the press conference announcing the agreement between the temple and the city of Garden Grove. Michael Goulding, The Orange County Register

The Quan Am Buddhist temple filed a lawsuit through the American Civil Liberties Union against the city of Garden Grove in August 2006 challenging the constitutionality of the city's zoning code. Both the Planning Commission and the City Council had denied the temple's plans to build a two-story building in what is a medical office building at the corner of Chapman and Nutwood.

According to the settlement, the temple will submit its application to demolish the existing office complex and construct a new 10,000-square-foot, one-story temple in its place.

Dieu Thanh, a 93-year-old nun and longtime member of the congregation, said she has been waiting for this day.

"Today, I'm very happy," she said through a translator. "Now I can come and spend the remaining days of my life in this temple."

"The temple will still have to meet all the requirements and go through the Planning Commission and the City Council," she said. "We can't guarantee that it will be approved."

But Emery said city staff will approve it as long as it complies with city code.

The compromise city officials have made is to consider this project, despite their earlier stance that they did not want to rezone this property from "office" to "residential" because office space is rare in Garden Grove. Neighbors in the area were also concerned about traffic and parking.

The temple will file its application and hope for the best, said Hector Villagra, director of the ACLU in Orange County. However, the settlement agreement will become void if the city does not approve the project, he said.

"We will have to file our lawsuit again if that happens," Villagra said.

Thich Dao Quang, the temple's abbot, said he is happy with the compromise.

"Our religion is about avoiding conflict," said Quang, speaking in Vietnamese. "So filing this lawsuit was a really hard decision for me personally."

All he and his congregation want to do is practice their religion, he said. Members of the congregation believe that the souls of their ancestors reside in the temple.

Thanh and other monks and nuns had to live in other homes because the building was not zoned residential. The proposed new building will include quarters for the clergy so they can perform their temple duties, said ACLU attorney Belinda Helzer.

The temple had to cease its services and put a stop to activities because they did not have permits. But temple administrators, with the help of the ACLU, were successful in obtaining a temporary injunction from a federal court judge, which allowed them to have limited services.

That injunction will still be effective until approval for the new building is obtained, Helzer said.