San Gabriel, CA (USA) -- The path to enlightenment begins with a single step. And 120 novices took that first step this week at the Hsi Lai Buddhist Temple in Hacienda Heights. Thus begins a two-week journey of introspection and commitment to the monks' way of life. 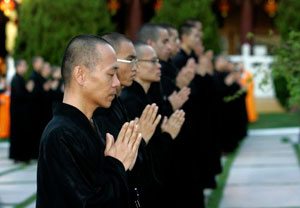 With their close-shorn heads and flowing black robes, it was hard to tell the monks from the nuns as they marched with military precision onto the temple's central plaza on Dec. 11.

They stood as statues, their ranks forming precise, parallel lines. A warm breeze ruffled their common cloth as well as the brilliant red, white and blue of the American flag waving on the flag pole beside them.

The acolytes quietly awaited Master Hsing Yun, the founder and head of the Fo Guang Shan Buddhist Order. He had flown in from Taiwan for the international ordination.

As the giant bell began to sound its deep, mellow greeting, smaller bells tinkled in the hands of brightly clad monks. Their saffron robes glistened in the sunlight as they surrounded the novices.

Seven Buddhist masters began the solemn procession through the ranks of the humbled novices. Their bright red sashes served as signs of their high rank.

The ordination ceremony dates back more than a thousand years. In their Tang Dynasty-style
Advertisement
robes, the monks murmured traditional Chinese Buddhist chants.

They looked like they had stepped out of time amid the Ming-style architecture of the local temple. Its high walls blocked the hustle and bustle of the busy Los Angeles basin.

In this tranquil setting, the acolytes will shed the modern world to begin their lifelong trip to enlightenment. The monks will take 250 vows, while the nuns will take 450.

The 14-day ceremony will ensure their readiness for the monastic life. All will promise to follow the strict codes of conduct, helping all living beings along the way.

Most share stories similar to the Venerable Hui Zai. The affable monk had been an electrical engineer in New Jersey. Now he serves the Hsi Lai Temple in Hacienda Heights.

"I do miss the changing of the seasons here," Zai admitted.

All grew silent as Master Yun stepped out from underneath the portico, the living embodiment of his huge bronze statue nearby.

Leaning on his cane, the founder slowly climbed the temple steps to a cushioned chair overlooking a sea of devoted followers.

As one, the novices turned to greet their masters, kneeling as they pressed their foreheads to the warm paving stones.

They would kowtow several times before listening to the welcome words of Master Yun.

Another monk kindly translated the master's instructions into English.

"On the 20th anniversary of this temple, we welcome you as you spread the word of Buddha to the rest of the world.

"Take refuge in Buddha, see him as your guide as well your goal ... Buddha is now your teacher. Take refuge in the Dharma. It represents truth. Regard it as your companion."

As the sun slowly set over the compound, the monks listened attentively to the master's words.

"It's all very moving," said the Venerable Hsi as she guided visitors to viewing places in the wings. Men and women pressed their palms pressed together in reverence.

The temple will be open to the public during the ordination. A highlight will be the Alms Round at 1 p.m. on Dec. 20, when the monks re-enact the tradition of begging from door to door that dates back to the time of the Buddha more than 2,500 years ago.

Join the novices as they begin their journey to enlightenment.
TOP