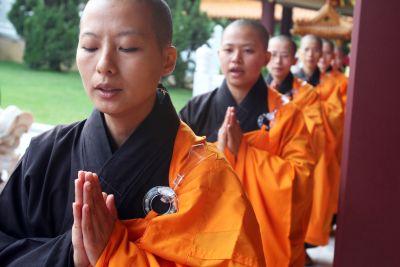 << Buddhist nuns and monks pray during a service celebrating the 20th the anniversary of the Hsi Lai Temple in Hacienda Heights on Sunday, Jan. 4. (Photos by James Carbone / Correspondent)

The Hsi Lai Temple celebrated its 20th anniversary in December. The two-week long celebration concluded Jan. 4 with a Water and Land Dharma service.

Today, the local complex is considered the largest Buddhist temple in the Western hemisphere. Its Ming dynasty style architecture covers 15 acres, with more than 100,000 square feet of floor space.

The beautiful temple offers the traditional gardens and statuary of ancient Chinese monasteries.

Amid this tranquil setting, Whittier College awarded its higher honor, doctorate of humane letters, to the Venerable Grand Master Hsing Yun. He is the founder of Fo Guang Shan, one of the largest Buddhist sects in the world.

"In giving this honor to the Venerable Master, we are celebrating his leadership, his goodness, and his example," said Whittier President Sharon Herzberger. "We are also celebrating the budding partnership that has grown between Whittier College and Hsi Lai and Fo Guang Shan Temples and our commitment to the work that they do."

Whittier College awards honorary degrees to exceptional individuals whose values and accomplishments parallel the college's educational mission. In the past it has honored Olympic Gold Medalist Rafer Johnson and journalist Daniel Schorr, according to Paul Kjellberg, a Whittier professor who nominated Yun.

"Venerable Master Yun is a great man and a wonderful teacher. That's why I nominated him for the honorary degree," explained Kjellberg, who teaches Asian religion and Buddhism.

He noted that Yun is a proponent of equality among all people and religious traditions.

"His order has the largest number of women in any Buddhist order today," the Whittier professor continued. "By providing educational and leadership opportunities, Master Yun has worked to improve the status of women in Taiwan."

Kjellberg points out that the Venerable Master revitalized Humanistic Buddhism.

Humanistic Buddhism focuses on world issues, caring for the living, benefiting the community and universal salvation.

"It's this combination of spirituality and practicality that appeals to Whittier's Quaker traditions," the professor said.

The Hsi Lai Temple reaches out to the community in many ways. It recently gave out scholarships to students to every school in the Hacienda La Puente Unified School District.

Over the past 20 years, the Hacienda Heights temple has served as a spiritual and cultural center for anyone interested in learning more about Buddhism, as well as the Chinese culture.

In 1992, Master Yun founded Buddha's Life International Association at the Hsi Lai Temple. Today, more than 100 chapters around the world boast a membership of a million people.

The Buddhist leader was pleased by the honor bestowed upon him by the local college.

"He said he was honored to receive the degree and it would make him work even more diligently as a monastic scholar and Buddhist monk, even in his 80s," translated the Venerable Miao Hsi, spokesperson for the temple.

And the Hsi Lai Temple will continue to bring "Buddha's light" to the West for many more years to come.
TOP