LONG BEACH, CA (USA) -- Despite a gloomy forecast, cold weather and rainfall, for the second time in a year about 400 congregants of a Cambodian Buddhist temple showed up to cast ballots in an attempt to find leadership at the embattled temple. 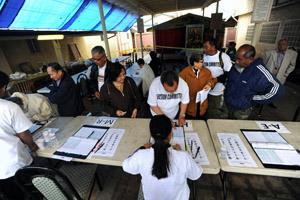 Congregants vote for nine new board members of Wat Vipassanaram in Long Beach on Friday. A court challenge to an election a year ago framed a yearlong dispute over leadership of the Cambodian Buddhist temple. More than 400 temple members were expected to vote. (Stephen Carr/Staff Photographer)

Friday's election, for all nine spots on the temple's board of directors, was ordered by Superior Court Judge Joseph Di Loreto, who has been overseeing a yearlong legal battle between the long-standing board of directors at Wat Vipassanaram and a dissident group of congregants supported by the monks.

Although temple bylaws allow only three members to be elected to the board in any year, Di Loreto said the existing board members had so abrogated their responsibilities that all nine seats should be put up.

The temple was open from 9 a.m. until 8 p.m. to give working templegoers time to vote. Ballots were being counted late Friday night and results should be in Sunday's Press-Telegram.

Twenty-four congregants were nominated and placed on the ballot, including monk Aun, in an apparent violation of the temple bylaws. Typically monks, especially in the conservative Theravada school of Buddhism practiced at

Wat Vipassanaram, eschew politics and secular matters. Aun was the only monk to accept nomination to the board.

A last-minute appeal by the existing board of directors for an injunction to stop the election failed when the Second District Appellate Court denied the petition.

While the election was being staged on one side of the wat complex, Siphann Tith, executive director of the current board, and his supporters sat on the other.

Tith said he sent a letter to the dissidents saying an election wouldn't be allowed on temple property, but relented when the congregants arrived.

"As long as they don't cause problems," Tith said, he wouldn't contest the staging of the event.

"I'm not going to have a confrontation, there has already been too many," Tith said.

Regardless of Friday's results, the existing board of directors is appealing Di Loreto's authority and rulings. None of the current board members is on the ballot, and Tith says he will not recognize the results.

The dissidents say when Di Loreto approves the election results they will assume control of governance of the temple and its assets, which are currently being handled by a court-appointed receiver.

"It feels good, finally," said board candidate Ly, one of the original leaders of the group contesting the current board of directors. "We'll just follow the judge's orders and everything should be OK."

Ben, another board candidate, was eager for the results to come in Friday afternoon.

"As soon as the judge approves, we're going to take action right away," Ben said.

"We're going to clean up this mess," said Sar.

In January 2008, in similar weather, members of the wat showed up in big numbers to oust the existing board of directors in the first election in more than a decade.

At the time, members of the board asked that the election be postponed until March. They had been in the process of rewriting bylaws since June to conform to California law and said they needed to finish the job to provide a fair and legitimate election.

Members of the existing board accused outsiders of trying to hijack the election and control of the temple assets by orchestrating a large influx of temple members with no real connection to the wat.

No members of the board were listed as candidates in the 2008 election and the board did not recognize the vote.

The two sides have been in court ever since.

The year-long legal struggle for control of Wat Vipassanaram, which owns several properties and had $4 million in assets before the legal wranglings began, has been a tumultuous experience.

The existing board of directors tried to dissolve the board and reform it as a separate entity.

The court appointed a receiver because of fears of absconding of temple funds.

The executive director was jailed for contempt of court for refusing to turn over financial records to the receiver.

The temple had a brief relationship with a Gnostic church in Orange run by John Ramirez, aka Johnny Rhondo, who was implicated in a Texas insurance fraud scheme in 2002.

As the rain fell, Paline Soth, another dissident, reflected on the parallels between this year's election and last year's.

"If it's raining, a lawsuit will follow," he said with a laugh.