Reaching Out to Strangers

Lake Arrowhead, CA (USA) -- They were here after the 2003 Old Fire and returned after the 2007 Grass Valley and Slide Fires. They are back again - volunteers from the Taiwan Buddhist Tzu Chi Foundation - reaching out to families in need during the holidays. 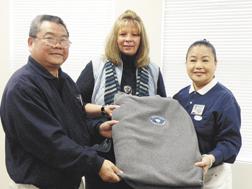 "We admire and respect your efforts," Lazar Chang, a disaster response specialist with the foundation, told members of COAD (Community Organizations Active in Disaster) at the November meeting. The charity organization, which was started 43 years ago in Taiwan, now boasts more than 10 million members, with 250,000 volunteers serving in 66 countries.

Their efforts, Chang explained, started with housewives who donated two cents a day.

Master Shih Cheng Yen, a Buddhist nun, was seeking a way to “humanize” Buddhism and bring people together to do things for society. She decided to establish a charitable foundation to help the poor and educate the rich because “the poor lack material goods and the rich lack spiritual food.”

She asked each of her 30 followers, who were mostly housewives, to save 50 cents of their daily grocery money (equivalent to U.S. $0.02). She gave each of them a little bamboo bank.

The followers wondered why they couldn't just put in a monthly amount, rather than the small amount each day. The Master's answer was, “If you save once a month, then you only show your compassion once a month. Even though the 50 cents you save daily is not of great value, you accumulate the spirit of helping and loving others every day.”

Lazar told the attendees at the COAD meeting "we try to support other community organizations. Our volunteers are trained to help people with compassion. By doing a good deed, we follow the edict we are given to be a good person."

Chang and two other Tzu Chi volunteers—Susan Liu and David Kou—thanked Cheryl Nagy, chair of COAD, for giving them the opportunity to be of service again in the mountain communities.

Tzu Chi donated 1,000 blankets the group makes from recycled plastic bottles to Hearts & Lives. The nonprofit agency, in turn, is donating the blankets to the Rim of the World Unified School District to replenish the emergency supplies in C-crates located at each school site.

Hearts & Lives, Nagy said, will give Tzu Chi a donation from its grant funds as a thank you for the blankets.

“We feel it is important to give back to the organization that has assisted so many mountain residents,” Nagy said. “Funds going to Tzu Chi are part of the recently received McCormick Grant funds designated for community emergency supplies.”

Tzu Chi is participating in Project Santa for the second year, adopting 10 families. “We never know for sure what they will bring,” Nagy said, “but they always share their foundation story.”