Vancouver, CA (USA) -- In Buddhist tradition, Obon is the time when the spirits of ancestors are said to return to their earthly homes, welcomed by fires and lanterns. In Japan, families visit cemeteries and tidy the graves, even share a picnic and make offerings of food to the returning ancestors. 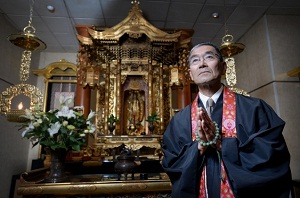 << According to Dr. Bob Akune, a “sensei” at the Vancouver Buddhist Temple, there are numerous celebrations and commemorations throughout the year, but Obon is probably the most widely observed. Photo Jennifer Gauthier

The festival dates back to a narrative in which a disciple of the Buddha realizes that his deceased mother is in the Realm of Hungry Souls, a hellish place. Through good deeds, the monk is able to free his mother’s soul and a dance of thankfulness and celebration erupts.

Last Sunday, on a closed-off street adjacent to Oppenheimer Park in the Downtown Eastside, that ancient dance was celebrated again.

Earlier in the afternoon, at the Vancouver Buddhist Temple just east of the park, hundreds of people lined up to bow before an ornate shrine and burn incense in memory of those who have gone before. Yet, despite the emphasis on those who have died, the commemoration is not sad. The memories of those who have passed, and gratefulness for their lives and their selflessness, is cause for celebration. And while the ceremony inside the temple was more solemn than celebratory, outside people were eating, laughing and dancing, with many wearing vibrantly coloured traditional Japanese attire.

“The idea of death in our teaching is that at the moment of your physical demise you’re considered that you have entered the Pure Land,” says Dr. Bob Akune, who is known as a “sensei,” a teacher, and who fills a role at the temple similar to that of a minister’s assistant. “For all intents and purposes you have become a Buddha. Buddha, very simply, is one who is all-knowing. It is an individual, whether in that person’s lifetime or after physical passing, [who is] completely free of human passions, ego.”

Obon is celebrated by different branches of Buddhism in different ways. The Vancouver Buddhist Temple is part of the Shin Buddhist tradition, or Jodo Shinshu, which is the largest Buddhist branch in Japan. It is a fairly small group in B.C., with maybe 700 or 800 individuals across more than a dozen temples and fellowships.

While there are numerous celebrations and commemorations throughout the temple year, Obon is probably the most widely observed, says Akune. The main sanctuary of the temple was packed and scores more watched the service on a screen in an adjacent hall. While Obon is a big deal for Buddhists around here, in Japan it has seeped seamlessly into the larger culture.

“Probably today, whether you’re a practising Buddhist or not, in Japan people just know that it’s a summer event and a holiday occasion and families get together,” Akune says.

The Vancouver Buddhist Temple was founded not far from its current location 111 years ago by Japanese immigrants. Now that most of the temple’s members are third-, fourth- or fifth-generation Canadian, the service takes place primarily in English.

There are sutras, scriptures, read in Japanese, as well as chants repeated and songs sung in the original Japanese, but the service proceeds mostly in English.

During the Second World War, Japanese-Canadians were forcibly relocated from the coast and interned in B.C.’s interior. After the war, some remained in the interior and some went further east, but those who came back to the coast mostly did not return to what had been known as Japantown. Today, almost none of the temple’s members live in the area. But they still gather there as generations have done for a century.

The coming together to commemorate the lives of ancestors is deeply tied up with the commitment to learning.

“We gather as family and friends to listen to the dharma, the teachings of the Buddha,” Akune says. “Most of our temple gatherings have to do with remembering, or using the memory of our lost ones as a means of gathering to learn the dharma.”

While dharma teachings enrich the individual, they are also a means of honouring the memory of those who have left this life. Obon is a time when people who have experienced a loss in the past year make a special offering of incense, but there are similar monthly services for people marking the anniversary of the passing of loved ones in that month.

After the service Sunday, the crowded temple poured out onto Jackson Avenue. A yagura, a scaffold, was erected and a huge drum lifted onto it. To the recorded sounds of traditional songs, dancers moved with synchronized motions in counterclockwise processions around the yagura while members of the temple and neighbours who happened to be passing by or hanging out in the park observed the ancient celebration that continues to live on in a corner of our city.