Kalmykia, Russia -- On December 27, the Golden Temple was opened in the capital of the republic of Kalmykia Elista (Russia), reports a REGNUM correspondent. The Golden Temple is the biggest Buddhist temple in Russia and Europe as well. Over 5,000 people came to the opening ceremony – residents of Kalmykia, representatives of Buddhist communities from Moscow, Volgograd, Saratov. 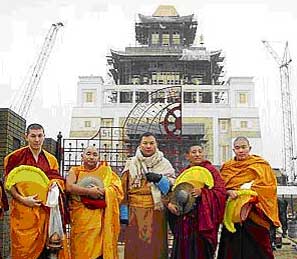 Kalmyk President Kirsan Ilyumzhinov, leadership of the Buddhist Community of the republic, Royal Nepalese Ambassador to the Russian Federation Hiranya Lal Shrestha, and representatives of Buddhist communities from Buryatia, Tuva, Mongolia, Tibet participated in the ceremony.

Simultaneously, in front of the temple a statue to the White Old Monk, Kalmyk national god was also opened on Tuesday. The two-meter high symbolizes residents of the steppe republic. During the opening ceremony, Kirsan Ilyumzhinov called the monument a dedication to the Kalmyks who died during the years of deportation: “We were in a hurry to construct the temple by the end of December, the tragic day when the deportation of the Kalmyk people started.”

The size of the Golden Temple and the Buddha statue let the Mongolian delegation call the temple “center of the world Buddhism.” Representative of His Holiness the Dalai Lama in Russia and the CIS Mr.Tashi said that from this moment, “not Kalmyk students will go to Indian Buddhist institutes, on the contrary Buddhist teachers from India and Nepal will go to Elista to study students from Kalmykia, other regions of Russia, from the CIS and European countries.”

The Buddha statue, reportedly to be the biggest in Europe will be made in the town of Volgodonsk (Rostov Region) and erected in Elista (Kalmykia). As “Nezavisimaya gazeta” reports, the decision was taken by the republican working group to construct a Buddhist religious complex in Elista.

The sculpture will be of nine meters high, made of metalware and covered by tinsel will occupy the central place in the European Buddhism Center that in several months will opened in Elista.

Manufacturing of the biggest sculpture of Buddha will take about a month and a half. A plaster model of the statue has been already made by a group of Kalmyk sculptors led by Vladimir Vaskin, who in mid-1990s created the first statue of Buddha in Kalmykia.

According to Vaskin, the new Kalmyk Buddha statue has no equal not only in Russia, but also in Europe on the whole. The highest statue of Buddha (7 m) is located in Buryatia (Russia). Only the 30-meter high statue of Buddha in Thailand and statues of Buddha Shakyamuni already broken by the Talibs are higher than the Kalmyk sculpture.

Vladimir Vaskin stressed that the sculpture image of Buddha was created taking into account the religious canons. To create sculptures of 17 arhats – the tutors – who will surround the new religious complex in Elista, religious sculptors from India and Nepal were invited. All the 17 sculptors of arhats should be ready by December 2005. According to the Buddhism canons they should be made of copper. However, there was a proposal to use bronze as the most durable metal.