Tibetans celebrate the beginning of a new year with Losar festival

Dharamshala India -- It was a joyous occasion for all Tibetans, as the people from Tibet are colloquially addressed, who conducted special prayers to mark "Losar" or, the beginning of a new year this Tuesday. 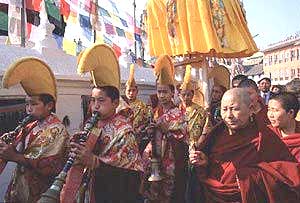 Dressed in traditional colourful costumes, the Tibetans living as refugees in Dharamshala, participated in various religious ceremonies held to pray for the prosperity and well-being of the entire world. It is a significant day for all.

The word Losar has been derived from the Tibetan word "Lo" which means "Year" and "Sar" stands for "New". The celebration of Losar can be traced back to the pre-Buddhist period in Tibet. During this time, when Tibetans practiced the Bon religion, a spiritual ceremony was held every winter, in which people offered large quantities of incense to appease the local spirits, deities and protectors.

This religious festival later evolved into an annual Buddhist festival, which is believed to have originated during the reign of Pude Gungyal, the ninth King of Tibet.

"We are in exile but we have all the freedom, and we are able to preserve our culture and spiritual tradition and we are doing everything and I think this is only possible in India because we are in India. We are grateful to the people of India for giving us this support and freedom," heaid.

Meanwhile, Dalai Lama, the spiritual leader of Tibetans, could not attend the new year celebrations as he was observing a spiritual retreat. But the people here prayed for him.

Legend has it that this ritual of celebrating Losar commenced when an old woman named Belma introduced the measurement of time, based on the phases of the moon. This festival took place during the flowering of the apricot trees of the Lhokha Yarla Shampo region in autumn.

It is widely believed to be the first-ever celebration of what has become the traditional farmers' festival. It was during this period that the arts of cultivation, irrigation, refining iron from ore and building bridges were first introduced in Tibet.

The ceremonies, which were instituted to celebrate these new capabilities, are also viewed as precursors of the Losar festival. Later, when the rudiments of the science of astrology, based on the five elements, were introduced in Tibet, this farmer's festival got transformed into Losar or New Year's festival.

In Tibetans' new year, the calendar is made up of twelve lunar months and Losar begins on the first day of the first month. In the monasteries, the celebrations for the Losar begin on the twenty-ninth day of the twelfth month. That is the day before the Tibetan New Year's Eve. On that day the monasteries conduct the protector deities' puja (a special kind of ritual) and begin preparations for the Losar celebrations.

The second day of Losar is known as King's Losar (gyal-po lo-sar) because officially the day is reserved for a secular gathering in the hall of Excellence of Samsara and Nirvana. His Holiness and his government exchange greetings with both monastic and lay dignitaries, such as representatives of China, India, Bhutan, Nepal, Mongolia and other foreign visitors.

Then from the third day onwards, the people and monks begin to celebrate and enjoy the festive season. In Tibet, before the Chinese invasion, Losar used to be celebrated for fifteen days or more. Today, it is joyously celebrated for three days in India.