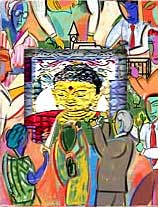 The Buddha proposed that the pursuit, accumulation and use of wealth be guided not only by self-interest but also by social responsibility and compassion for the less fortunate and the less endowed.

If this dictum is followed, the world will not be torn by the horrible conflicts and tensions that it is today. Fantastic strides in technology, mass production of an array of goods and faster communications have not made the world a better place to live.

These advances have only increased economic, social and political disparities; poverty, national and international instability; armed conflicts; terrorism and counter terrorism; and a sense of fear and insecurity.

To fight pervasive fear and insecurity, elaborate and expensive security systems and deterrents are put in place. Defence budgets have soared even in the poorest countries.

It is in the light of these developments that Prof JW Wickramasinghe, of the University of Sri Jayawardenepura in Sri Lanka, has a made a strong plea for the adoption of Buddhist economic principles, which stress compassion, altruistic sharing, and a social, as opposed to a purely individual-driven approach.

Buddhist economics replaces "self-interest" by "peoples' interest" as the driving force or rationale of economic activity.

In his work Buddhist Theory of Development Economics published by the Buddhist Cultural Centre, Dehiwela, Sri Lanka in 2002, Wickramasinghe paints a grim picture of the present state of the world.

He then contrasts the prescriptions of the traditional Western economists with those of the Buddha as contained in his numerous "Suttas". Quoting the Human Development Report of 1998, he says that 75 per cent of the world's population lives in the developing countries, but they enjoy only 20 per cent of the world's total output.

In 1996, the value of exports of all developing countries amounted to US$ 26 billion, which was only 10 per cent of UK's exports. The developing countries had been losing up to $700 billion in annual export earnings as a result of the trade barriers maintained by the industrialised countries.

"Had the poorest countries been able to maintain their share of the world market at the mid-1980s level, their average per capita incomes would be $32 a year higher, a significant increase over today's figure of $228 a year," Wickramasinghe notes.

"The export earnings of developing countries could rise by $127 billion a year if developed countries opened their markets to textile and clothing imports."

"In 1998 alone, the total agricultural support in the industrialised countries amounted to $353 billion, more than triple the value of official development assistance," he points out.

In 1993, more than 160 million children in the world were moderately or severely under nourished. Half a million women in the developing countries died each year during child birth.

And to contain the intense competition and tension in the world, created by Western economic theories and policies, countries have been spending enormous amounts on defence.

In 1995, global defence spending stood at $ 800 billion, of which the poverty stricken South Asian countries accounted for $15 billion, says Wickramasinghe.

Disparities have been increasing in Sri Lanka, an avowedly Buddhist and democratic country.

Using the Consumer Finance and Socio-Economic Survey data, Wickramasinghe points out that while in 1973, the lowest income recipient decile got 1.8 per cent of the total, it steadily fell to 0.40 per cent in 1985-86.

The root cause of all this is the basic precept of Western economic science, which is that the ultimate objective of all economic activity is maximisation of the satisfaction of the individual.

Economists like Adam Smith believed that self-centered pursuit of economic activity would lead to perfect competition, and this would eventually level society.

But this has not happened, says Wickramasinghe.

What one sees is the very opposite. The development of capitalism and globalisation has only resulted in the widening of disparities. This has been due to the almost complete disregard for social welfare, equality and the common good.

Modern states have used instruments like taxation, welfare measures and affirmative action to narrow the disparities. But these have not been very effective, except in a few Scandinavian countries.

What is needed, according to Wickramasinghe, is not only the replacement of the "self-centered" approach by a "people-friendly" approach but a change of heart, that is, change at the individual level.

Individuals have to internalise the "people-friendly" approach. Only then will the new system work smoothly and last long. This calls for a deep study of Buddhism and the adoption of its basic principles.

In contrast to Adam Smith's contentions, the Buddha says in the "Kosambiya Sutta" that when a person consumes wealth only by himself without sharing with others, he generates social unrest through jealousy and ill will. Unrest manifests itself in stealing and civil commotion.

While Western economics is based on greed, an insatiable appetite for wealth and generation of wealth, the Buddha's economics rested on production and acquisition of wealth without a trace of greed.

Greed to him was the root cause of inequality and subjection, and the consequent unrest, destruction and radical change.

The Buddha was acutely aware of the power of greed and Wickramasinghe quotes him as saying in the "Rajja Sutta" that "even if the Himalayan mountain is transformed into a mass of gold, it would not be sufficient to satisfy the craving of a human being!"

The Buddha foresaw the consequences of greed-driven economics in the " Chakkavatti Sihananda Sutta". He decried craving in the "Ratthapala Sutta".

The Buddha wanted people to produce wealth and consume it in the right way in the "Rasiya Sutta".

He said that people should ask themselves the following questions: "Was the wealth accumulated in the right, ethnical way? Was unfair means used? Whether consumption of it will deprive others of consumption? Whether one is developing a needless attachment to the article of consumption?

Distribution of wealth in the form of donation and other kinds of sharing is the cornerstone of Buddhist economics.

Wickramasinghe quotes the "Sanyuktta Nikaya, Sedaka Suttas" to say that protection of others is the protection of oneself, since it obviates the need for measures to protect one's wealth and person.

"Apart from the mental satisfaction one derives from a donation, it reduces the cost of enjoying wealth," he observes.

The Buddha laid out four principles for the use of wealth:

1. To make one's mother and father, children and wife, servants and workmen, and friends and comrades, happy and cheerful.

2. To make oneself secure from misfortunes.

3. To make offerings to relatives, guests, the ancestors and deities.

4. To give gifts to ascetics and Brahmins.

The Buddha was against both over indulgence and self-mortification or self- denial.

In the "Nivapa Sutta" and the "Dhammachakkappavattna Sutta" he criticised over indulgence because he detested craving. But he decried self-mortification and self-denial also. These were useless he said.

He advocated the Middle Path in personal, social, political and economic life.

The Buddha said wealth must be pursued and enjoyed without lustful attachment (Bhogha Sukha). And it should subject itself to universal compassion (Karuna).

However, the Buddha was against charity for its own sake. He wanted donations to enable the less privileged to get the wherewithal to make a better living.

The less privileged should be enabled to stand on their own feet and not be abjectly dependent and indolent. He condemned laziness in the "Mala Sutta".

Misinterpretation of the Buddha

Buddhism is often misinterpreted as a fatalistic religion, in which the pursuit of pleasure (or life itself) is decried as the cause of unhappiness or "Dukka".

Buddhists are expected to cultivate "detachment" and work towards total liberation or "nirvana".

These dictates are considered to be anti-economic activity or anti-development. But Wickramasinghe considers this view a "sad misunderstanding".

He says that the Buddha never decried worldly or mundane activities. All he wanted was a combination of economic and spiritual values for the sake of obtaining the maximum, all round benefit, for the individual and the society.

This was stated in the "Dwichakku Sutta". The Buddha was acutely aware of mundane problems. He gave foremost importance to the fighting of hunger.

As per the Dhammapada, there is no pain greater than hunger. It is treated as the most serious illness.

The utter practicality of Buddhism is reflected in the fact that its early followers were traders and that it was through trading communities rather than professional missionaries per se, that it spread to all parts of India, and South and South East Asia.

Covering both the natural and the spiritual, it should be based on a religious sense arising from the experience of all things, natural and spiritual, as a meaningful unity. Buddhism answers this description."