Colombo, Sri Lanka -- Sri Lanka's government has accused Tamil Tiger rebels of attacking a historic Buddhist temple in the eastern region. A government statement said that on Monday the rebels had fired small arms towards the Somawathi Shrine, about 170 km northeast of  Colombo. The rebels fled after security forces guarding the shrine returned fire, the statement said. 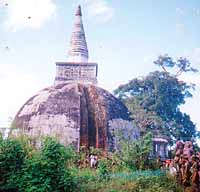 The rebels have not commented on the incident yet. The government statement said that Tigers had attacked the shrine to try to "arouse the sentiments of the Sinhalese Buddhists against the innocent Tamils to cause Sinhalese-Tamil strife".

On Monday, the government urged Tamil Tiger rebels to resume stalled peace talks to avoid a return to civil war. Rising violence in Sri Lanka has left almost 100 people dead in the past week.

The BBC's Dumeetha Luthra in Colombo says the island's four-year-old ceasefire exists only on paper and there is a very real chance of war.

On Monday, the government urged Tamil Tiger rebels to resume stalled peace talks to avoid a return to civil war.

The truce has disintegrated over the last six months, with daily violations and escalating violence.