Book review: 'The Novice: A Story of True Love'

A Vietnamese legend is the root of Zen Buddhist master Thich Nhat Hanh's debut novel. With its gender disguise and message of forgiveness, it may remind readers a bit of 'Yentl' mixed with the Sermon on the Mount.

Los Angeles, CA (USA) -- The novel, as a storytelling device, begins with that white parchment of possibility, turns many tricks, reveals many truths and, in the best of hands, can exploit the very worst in humankind. Novels are fairly seditious undertakings. And that's why the very idea of a Zen novel sounds like either a comedy sketch or simply an improbable stretch. 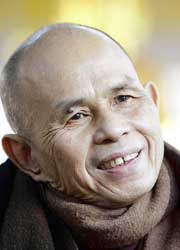 And yet that's what Vietnamese Buddhist Zen master Thich Nhat Hanh has done with his first novel, "The Novice: A Story of True Love." Hanh, who is also a poet and the bestselling author of "Peace Is Every Step," was nominated by the Rev. Martin Luther King Jr. in 1967 for a Nobel Peace Prize for his efforts to reconcile the peoples of North and South Vietnam.

The true story upon which "The Novice" is based has become part of Vietnamese folklore. Hundreds of years later, Hanh has adapted the legend into a novel. And yet this is a curious adaptation, because the story about a woman who disguises herself as a man to become a monk, suffers enormously but is filled with infinite forgiveness, is very much Thich Nhat Hanh's own story — except for the gender disguise.

Kinh Tam is a beautiful young woman who wishes to live the life of a Buddhist monk. At the time, however, there are no roles for women in Buddhism. She ends up as a bride in a loveless marriage with a spineless husband. At one point, his parents falsely accuse her of trying to kill their son. She refuses to admit her guilt and is sent back to her own family in shame.

Kinh Tam decides that she must somehow find a way to pursue her dream of studying Buddhist practices as a novice monk. In an act that freakishly resembles the plot conceit for the I.B. Singer short story "Yentl the Yeshiva Boy," Kinh Tam decides to cut her hair and travel far away from her family by herself to begin her monastic training at the Dharma Cloud Temple. While there she excels far beyond that of the other novices, and her teachers begin to regard her as a Buddhist prodigy, exhibiting the Zen perfections of generosity, mindfulness, magnanimity, diligence, patience and insight.

Unfortunately, Kinh Tam's faith is put to the ultimate test when a local girl from a wealthy family develops a crush on her. When the girl is rebuffed, both because Kinh Tam is herself a girl and monks are not permitted to be alone with a woman, the girl maliciously accuses Kinh Tam of impregnating her.

This lie is easily disproved. To do that, however, Kinh Tam would have to show that she's a woman and a fraud. It would result in her banishment from the temple. What's more important — proof of her innocence or the ecstasy of her Buddhist studies? Again, Kinh Tam must deny a false accusation. But the consequence of maintaining her innocence this time will be much harder to bear.
Ads by Google

The village council decides to beat the truth out of Kinh Tam with the kind of ferocious lashings that makes this novel fine companion reading to the Mel Gibson film "The Passion of the Christ" — minus the cartoonish anti-Semitism. And not unlike Jesus Christ, Kinh Tam accepts this merciless punishment with forgiveness and equanimity.

It's difficult to read "The Novice" without making the connection between the novelist and his protagonist. Thich Nhat Hanh has also endured great hardship, banishment and pain. And his followers around the world regard him with the same reverence as they do the Vietnamese story of the actual Quan Am Thi Kinh.

Ultimately, this enchanting tale is a Zen analogue to the story of Jesus' Sermon on the Mount, in which Jesus transforms biblical vengeance into a Christian's duty to "turn the other cheek." The harsh treatment he has received for 40 years, and his willingness to forgive all those who have done him harm, makes Thich Nhat Hanh the spiritual heir of, coincidentally, a Zen legend and a good Christian's first maxim.

-----------
Rosenbaum, a novelist, essayist and law professor, is the author of "The Golems of Gotham" and a forthcoming novel for young adults, "The Stranger Within Sarah Stein."