Tibet: So near yet so far

New Delhi, India -- Though we share thousands of kilometers of our border with Tibet, our knowledge of that country woeful. One reason for it the forbidding presence the Himalayas that limits intercourse. 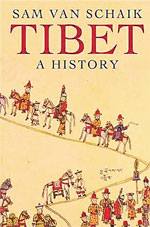 The other, more germane, is the fact that China, which now controls Tibet, disputes the entire length of its border with India. This led to a short war in 1962 that brought defeat to India. Since then, the border has been marked by a Line Actual Control, which a virtual line, not a real one, that remains to be determined.

Yet in the last two decades, Tibet has opened itself to even Indians. Well-heeled people often fly to Lhasa and hire SUVs visit Lake Manasarovar and Mount Kailash, or catch a helicopter ride from Nepal. Even so, where Indians are concerned, the relationship is anything but neighbourly - trade is permitted across some points, and the only cross-border point where you can enter Tibet is through Lipu Lekh pass in Uttarakhand.

Sam Van Schaik's book is an ideal entry point for anyone keen know about or travel to Tibet. Written in an easy narrative style, the book takes you through its early history, its contact with Buddhism, China, Mongolia and India, the emergence of the lama system, and the rise and fall of the Dalai Lama. early the Studies Though Tibet rest as everything kingdom Shangri-status Though world, that there ambiguous main fact and Dalai Lama. Van Schaik is a specialist in early Buddhism and a lecturer at the School of Oriental and African Studies in London.

Though a neighbour of India, Tibet is remote and exotic for the rest of the world. It has been seen everything from a xenophobic kingdom run by monks to the Shangri-la. More intriguing is the status of Tibet as a political entity.

Though most countries of the world, including India, recognise that Tibet is part of China, there is something ambiguous about its status. In the main this arises from the fact that its last spiritual and temporal ruler, the Dalai Lama, lives in exile with over tens of thousands Tibetans who fled Chinese rule. The Chinese have poured in a vast fortune to transform the region, but they have not been able to get the loyalty of Tibetans.

Van Schaik brings out the important distinction between the ethnographic Tibet and the political. Ethnographically, Tibet has extended beyond its political boundaries as the ' Tibet Autonomous Region of China' - it stretches out into the provinces of Chinghai, Amdo, Kham, Hor, Gansu and Sichuan. Indeed, one of the striking aspects of the recent protests of Tibetans have been their occurrence in this extended Greater Tibet area where Tibetans today are in a minority. Historically, too, Tibetan kings controlled a vast empire between the 8th and 17th centuries that extended from modern Xinjiang to territories deep into China in the east.

Though China was a great power, Tibet was never its vassal, but actually at many points its equal. Theirs was a complex relationship where Tibetan lamas were preceptors to Chinese emperors and warlords.

Van Schaik takes us through the twists and turns of Tibetan history, both political and religious. Indeed, it is not surprising that they were often intertwined. India looms large in this, not as a conqueror, but as a provider of teachers and tradition. Many of the names - Shantarakshita, Padmasambhava, Kamalashila, Shraddhakaravarman and Atisha, to name but a few - played a significant role in shaping the Buddhist culture of Tibet. Mongol rule left a strong imprint on Tibet, but after the collapse of the Mongol Empire in the middle of the 14th century, Tibet became free of military incursions and developed good relations with the Ming dynasty that succeeded the Mongols in China.

The Mings were succeeded by the Manchus, who invited the Dalai Lama to become the preceptor of their emperor. Chinese historians often cite this to claim that the Dalai Lama had submitted to the Chinese government, but the reality is much more complex, and Van Schaik notes that this interpretation is " hardly borne out by either the Tibetan or the Chinese records of the time".

The history of the Chinese conquest of Tibet in 1949-50 is better known, as is the flight of the Dalai Lama and his exile in India. The Chinese ought to have learnt by now that material progress is not everything.

Tibetans yearn for something more than what the Chinese are willing to offer. The Chinese now probably hope that with the passing of the present Dalai Lama, they will control his succession. But things have never been simple in the complex history of China and Tibet.