Ghosts, amulets, ringtones, and the rest of Thai Buddhism

Bangkok, Thailand -- Somdet To is, according to Justin McDaniel "arguably the most famous monk in Thai history." His image, picture, chants, biographies, amulets, and pamphlets are everywhere. Yet you could read everything written on Thai Buddhism in English for scholars or tourists without noticing his existence, let alone his importance. In this superb book, McDaniel not only does justice to Somdet To but suggests a new way of thinking about "Thai Buddhism" and how it is studied. 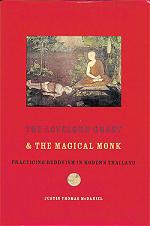 Somdet To was born around 1788. There are many biographies, films, and webpages on his life, but they conflict wildly and there is little documentary proof. He is known through many stories. According to one version, he was the son of King Rama I, sired on a Lao peasant girl during a military campaign in the North. This story gives him origins that range from the top to the bottom of society, from centre to periphery. He became a great Pali scholar, abbot of prestigious Wat Rakhang, and a preceptor of kings.

But why is he so famous down to the present? Not for his teachings. Only a few sermons survive and they are unremarkable. Not for his writings _ a few pages with recipes for making amulets. Not for any philosophical innovation or reform movement. His legacy consists mainly of stories about his life which show him as compassionate, very down-to-earth, even ready to mock his great patron, the king.

As with the Buddha, stories of the life (and previous lives) are a form of teaching by example. But perhaps the best-known facts about Somdet To are that he meditated on corpses, exorcised ghosts, and specialised in making protective devices, especially amulets. He is remembered for his exceptional powers. Amulets have since become big business and Somdet To's are among the most valued and costly.

One story about Somdet To gives him a role in Siam's most famous ghost tale. After dying in childbirth, Mae Nak refused to abandon her beloved husband and brutally killed neighbours who told him he was living with a ghost. Somdet To was called in to quell Nak's spirit and end the carnage. Nak's local wat (temple), now in the Bangkok suburbs, is thronged everyday with people begging help from the spirit of this loving but vicious ghost, from Somdet To, and from a host of other shrines and fortune tellers.

Somdet To quelled the ghost with a chant, the Jinpanjara gatha. This rather martial verse is now hugely popular, available through pamphlet, radio broadcast downloadable ringtone, or impregnated in sacred water by a statue of Somdet To enclosing a recorder playing the chant on an endless loop.

McDaniel's point is that the practice of Buddhism in Thailand today is all about shrines to legendary ghosts, amulets related to famous old monks, magical chants used as ringtones, family outings to theme parks full of statues of figures gruesomely tortured in hell, and so on.

Scholars have presented an idealised Buddhism, cleansed and standardised by teachings from Sri Lanka, reform movements led by kings, and modern legislation. In reality, McDaniel argues, these efforts have all failed. There is not even a standard liturgy, a manual for religious performances. Thousands of monks and wats have produced their own versions. There has been no policing of the boundaries of what is worshipable. Local spirits, Hindu and Chinese gods, ghosts like Nak, past kings, and increasingly famous monks like Somdet To have slipped into the pantheon. An abbot asked McDaniel for a crucifix because he thought it would be a good addition to his collection of protective amulets.

McDaniel resists describing the result as syncretism on grounds that the practitioners themselves do not see it that way. The fashionable term, hybridity, does not appear once in this book. McDaniel also argues strongly against classifying practices into "pure Buddhism" and other, magical elements labelled as "tantric" or "esoteric." He suggests that "pure Buddhism" is something imagined by foreign scholars, particularly those with a Protestant background (McDaniel is Irish Catholic). In history, the "pure" and the rest cannot be disentangled. The Thammayut reform movement, which supposedly began as an effort to purify Buddhist practice, ended up lionizing forest monks famed for their supernatural powers. McDaniel delights in pointing out that several modern-day proponents of "pure" Buddhism also own protective amulets.

McDaniel suggests that individuals have "repertoires," meaning menus of religious things they will own or do. These repertoires can be very varied and very flexible over time. Fads come and go. Recently Ganesha has had a good run, but may now be fading. Neither state nor Sangha makes any significant effort to police what these repertoires may contain. The result is that "Thai Buddhism" is extraordinarily alive and inventive, with no sign of dying away like some well-regulated faiths. McDaniel scoffs at scholars who see the proliferation of cults and especially of commercialism as a reaction to capitalism, globalisation, and modern angst. He suggests instead that the variety and inventiveness is a product of unregulated popular ownership, and that things have probably always been much the same. He twits the reformers who wring their hands over crass commercialism, and would like Thai Buddhism to be all meditation and good works; their chances of quelling the cacophony of everyday practice are nil.

McDaniel also tries to define the messages and meanings of the real-world "Thai Buddhism" that includes Somdet To's martial chant, Mae Nak's shrine, hell theme parks, and all the rest. He suggest that besides the well-known Buddhist qualities of non-attachment, compassion, and enlightenment, everyday practice involves "a celebration of abundance, a promotion of heritage, a desire for security, and a rhetoric of graciousness." In short, people value protection from dangers, worldly success, fellow feeling, national identity, and more beauty in life.

Finally, McDaniel suggests that Thai Buddhism is changing. It no longer looks to India or Sri Lanka as its source, but sees itself as leader of the Theravada world. Meanwhile the position of the historical Buddha is shifting. In a typical wat today, crowds throng shrines to old monks, legendary ghosts, past kings, and local spirits while the hall housing the main image is often closed and locked. There is a trend of building massive statues of famous monks, including Somdet To. There are even wats where Somdet To's image has the central site and the Buddha is to one side.

This book informs, entertains, and provokes. I think this is the first volume on Buddhism which made me laugh, often. The author intends it to be controversial and hopefully it will provoke some fierce responses. Currently the publication is an expensive, academic-targeted hardback. Its appeal should be wider. Anyone interested in Thailand today, in Buddhism, in ghosts, or in why CentralWorld was burned down (it was the only building in the area with no protective shrine), should read this brilliant book.