Buddhism and human rights: The journey to the west

Bangkok, Thailand -- The Chinese classic "Journey to the West", based on the Tang Dynasty monk Xuanzang's pilgrimage to India, is actually an allegory of a Buddhist spiritual journey. Also known as Adventures of the Monkey God, it is a fitting tool to compare Buddhism and Kantian philosophy. 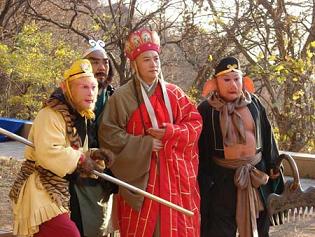 As fantastically explained by Venerable Khemananda in his commentary to Journey, the Buddhist way to enlightenment is allegorised by the arduous voyage to India which Xuanzang and his company must take while battling spiritual obstacles in the form of hostile demons and selfish humans.

On the other hand, Kantian reasoning, which can achieve enlightened altruism, can be thought of as the spontaneous Monkey King, symbolising emerging wisdom (panna). Although he can fly to India and have an audience with the Buddha (enlightenment), Monkey can never remain there. His indispensable role is to guide the whole troupe.

Represents forming morality, the gluttonous Pigsy often lapses into greed and lust and must be constantly kept in check. Both Kant and the Buddha, therefore, formulated principles for human ethics. As all humans are of equal dignity, Kant says that we must not put our needs above those of others. The Buddha also says, "On traversing all directions with the mind; one finds no one anywhere dearer than oneself; likewise everyone holds himself most dear."

Because an ethical principle is aimed as a law for all beings with equal dignity, it must be equally valid for all. To ensure this, Kant says it must pass the test of being universalised. That is, when adopted by everyone it can never be in conflict with itself.

In Veludvara Sutta, the Buddha demonstrates how such thought experiment can be done. When villagers asked him how they should fulfill their specific wishes, desires and hopes, he told them to reflect on how each of them desires happiness and is averse to suffering, how something such as being deprived of life will not be agreeable to him, and what is disagreeable to him is to others too.

As we can see, the Buddha codified a number of Buddhist precepts for personal conduct. Interestingly, using Kant's reasoning, we can generate all Buddhist precepts, as well as additional ones for enslavement, torture or arbitrary detention, for example.

Not only that, all the Buddhist precepts are also in agreement with another Kantian formulation: "Act in such a way that you use the humanity in your own person and in the person of any third party at all times as an end in itself and never simply as a means to an end".

The Buddhist position in this regard is probably most clearly expressed in Mahabodhi Jataka. In this story, a king was instructed in the "science of princes" by a Machiavelli-like advisor that, "You must avail yourself of men, as of shady trees, considering them fit objects to resort to. Accordingly, endeavour to extend your glory by showing them gratitude until your policy ceases to want their use. They are to be appointed to their task in the manner of victims destined for the sacrifice." This doctrine was rebuked by the future-Buddha as soiled by cruelty and contrary to Dhamma.

Buddhist precepts focusing on individual abstention from blameworthy acts jeopardising interpersonal relationships and social fabric, however, are necessary but not sufficient conditions to ensure a dignified life for all members of society because human dignity can be harmed not only by individuals but also by the states as well as political, social, economic and cultural institutions.

The world, reeling from two world wars, was compelled to define what the sufficient social conditions should be. Aided by Kant's universally-oriented philosophy among others, the results are now enshrined in the UDHR and international laws as human rights principles.

Although they arose from a distinct cultural pathway, many of these rights can be directly arrived at from Buddhist precepts. With the non-self principle in mind, Buddhist personal codes of conduct phrased as "one shall abstain from X" can be altruistically de-individualised to "all beings have the right to non-X" and become a set of social-level precepts such as the rights to life, ownership and family, not to be violated.

This intimate correspondence between Kantian philosophy and Buddhism shows that human rights are nothing but precepts universalised to articulate necessary conditions for a life worthy of all humans beings with equal freedom and dignity.

Thus, in addition to a moral compass pointing to the same altruistic goal as the Buddha's constellations of teachings, Kantian philosophy also gave birth to universal precepts for the modern world. This moral roadmap, known as human rights, complements what the Buddha has given for individual conduct. With these two sets of precepts, our inner and outer Pigsy can finally be reigned in for the journey.

Keown wrote, "The UDHR itself and modern charters like it do not offer a comprehensive vision of human good. The purpose is to secure only what might be termed the 'minimum conditions' for human flourishing in a pluralistic milieu. The task of articulating a comprehensive vision of what is ultimately valuable in human life and how it is to be attained falls to the competing theories of human good found in religions, philosophies and ideologies."

The Buddha offers one such vision of "the good life" equally attainable by all. In Kannakatthala Sutta, he emphasises, "I say that among [humans of different births] there is no difference between the deliverance of one and the deliverance of the others. Suppose a man took dry saka wood, sala wood, mango wood and fig wood, lit a fire, and produced heat. Would there be any difference among these fires?"

The Buddha would no doubt welcome as ideal a society in which all humans, regardless of birth, gender, age or other statuses, are guaranteed basic conditions for their welfare and happiness.

In "Laws from Buddhist Perspective", Venerable PA Payutto categorises laws into those imposed to control people and those aimed to facilitate their welfare, happiness and development. He states, "A law should not have public order or harmony as its end, but a means to facilitate improvement of people's lives in order that they can reach higher goals through learning. The law should be conducive for the development of human beings, enabling them to live 'the good life' and aspire to higher virtues."

Thus, in order to pave the way for our collective Pigsy to reach higher goals, we can't rely solely on individual precepts but must strive to actualise the social precepts as already exist in the UDHR. This is much easier said than done. Although Kant independently formulated a moral gold standard similar to the Buddha's teachings, there's a crucial difference that in Kantian philosophy altruism is achieved through reasoning and temporary suspension of selfish desire.

American Buddhist scholar Justin Whitaker suggests, "Kant was at the same time perhaps too confident in humanity's ability to use reason to evaluate motivations, as well as pessimistic that one could ever truly do this in this lifetime." The Dhammapada fittingly says, "The wisdom of one whose thought is unsteady, who does not know the true Dhamma, whose serenity of mind is troubled, is not perfected."

The Buddha, in contrast, not only laid down an altruistic philosophy and codes of conduct, but also taught the way to eliminate selfish desire entirely with right concentration, symbolised in Journey by the heavy-lifting Friar Sand. The mindful effort to achieve this is characterised by the Dhammapada verse, "By gradual practice, from moment to moment, and little by little; let the wise man blow out his own impurities; just as a smith removes the dross of ore."

Collective concentration is also the most difficult part for society. To make human rights reality, Thailand must find its Friar Sand-like determination in the form of political commitment and full public participation-not just lip-service to the UDHR.

In the end, the naysayers may be right about one thing: human rights principles emerged from and lead to the "West". But there's also something else they should know. A "Journey to the West" may very well turn out to take our society closer to the land of the Buddha in a way that traditional Thai Buddhism throughout history never could.