"Where the Heart Beats: John Cage, Zen Buddhism, and the Inner Life of Artists" (Penguin Press), by Kay Larson

San Francisco, CA (USA) -- In August 1952 in a barn-turned-concert-venue in Woodstock, N.Y., a man sat at a piano and studied a score. He opened and closed the keyboard lid three times — but didn't play a sound. After 4 minutes and 33 seconds, the performer walked off the stage. Outrage ensued. 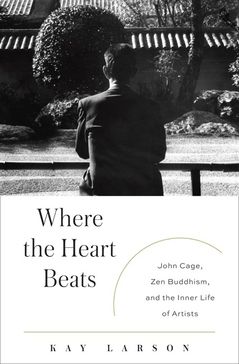 Today many of us recognize the piece described above as 4'33" by legendary composer John Cage — now considered one of the major musical works of the 20th century.

In a new biography of this pioneering artist, art critic Kay Larson links Cage's daring presentation of "the sound of no sound" to his growing interest in Eastern religion, particularly Zen Buddhism, at a time of personal crisis in the 1940s and '50s.

According to Larson, who is herself a devout Buddhist, Cage was frustrated that audiences weren't responding to his difficult, avant-garde music. He was starting to think that music that expressed a composer's emotions was pointless since no one understood it anyway.

His religious studies were leading him to believe that the true purpose of music was to quiet the mind, as in Buddhist meditation, and awaken the heart to the glorious reality of the present.

The son of an inventor, Cage seems to have been born with a radically open and questioning mind. By the time he wrote the "silent piece," he had already placed rods, bolts and other objects on and between piano strings — the prepared piano — to alter the sound.

One of the first musicians to experiment with electronic music, he also used radios as instruments and composed music based on indeterminacy and chance. As a young man — Cage was born in Los Angeles in 1912 — he was drawn to the modernist art movements coming out of Europe — cubism, futurism, geometric abstraction, atonal music.

For a couple years in the 1930s, he studied composition in Los Angeles with the Austrian composer Arnold Schoenberg but ultimately rejected his rule-driven 12-tone method of composition.

Cage preferred the revolutionary ideas of the Italian futurist composer Luigi Russolo, whose manifesto "The Art of Noises" declared that ordinary noise — from the clang of the factory to the rumble of the street — was the true music of the modern age.

For much of his life, like a Zen disciple, Cage sought to make art that honoured the transitory sounds and events of everyday life. His rule-breaking forays into what became known as installation, performance and conceptual art paved the way to the avant-garde movements that still perplex audiences today.