Auckland, New Zealand -- The premise of Richard C. Morais' Buddhaland Brooklyn is that an apparent fish-out-of-water can eventually find, and adjust to, its new pond. Morais takes rather a long time to get there, but he makes it. 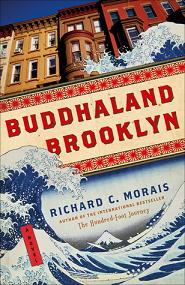 Oda, an 11-year-old boy from what is described as a quaint mountain village (with 15,000 people, no less), is sent to train as a Buddhist monk at the nearby head temple of the Headwater sect of Mahayana Buddhism. After nearly 30 years in this secluded environment, he is chosen to go to New York to set up a new temple in Brooklyn.

Almost greater than the shock of the huge city on Oda's sensibilities is the motley collection of American Buddhists he has to re-educate into the traditional ways of religious practice. Although reportedly proficient in English, Oda has difficulty understanding the Bronx dialect - and he would not be alone in that - but he also has cultural misunderstandings and misguided practices to negotiate.

His arrogance and isolation from his new flock do not endear him to most of his believers. Only when Oda realises his shortcomings and appreciates the care he has unwittingly been receiving does he understand what acceptance really means, and finds the true meaning of his faith.

Morais' style of writing is difficult to analyse. His descriptive passages are convincing, although adjective-heavy, but the frequent juxtapositions of the spiritual with the risible are disruptive.

In one instance, Oda finds solace on a wooded slope beside the river, at peace under the trees as he watches a troop of macaques "pick their noses and scratch their bums".

From the sublime to the gor-blimey, as my mother used to say.

Characterisation is another area where Morais has difficulty. The cast of characters in Buddhaland Brooklyn is wide and varied, but they do not convince or appeal.

They seem uniformly unable or unwilling to accept Oda's form of Buddhism, which was what they had, after all, requested, and all seem to confirm an outsider's rather unsympathetic view of Americans.

But all comes right in the end. The temple is built, Oda decides to stay in New York rather than return to his cloistered life in Japan, and the true meaning of enlightenment reveals itself to this turbulent priest.

Morais does not make life easy for himself either. Rather than writing about what he knows, he reaches for subjects outside his realm of experience and borrows heavily from works of mysticism and religion, which he freely admits.

This imparts a degree of confusion and lack of credibility. Conversation is stilted and unconvincing and the phrasing is often clumsy.

In Morais' first novel, The Hundred-Foot Journey, he followed the path of a young Indian man from humble beginnings in his family restaurant to three Michelin-star success. This rags-to-riches pilgrimage seems to be his schtick. One wonders where he will take it next, but not with a great deal of interest.