This book is the final of a series of four written over a period of 10 years and the result of an East-West collaborative effort by scholars who study the psychology contained in Buddhism. These volumes draw on what Maurits has coined Buddhism 4.0, a secular and psychological approach to Buddhism which respects and honors the vast groundwork of the Dharma and its complex developments. 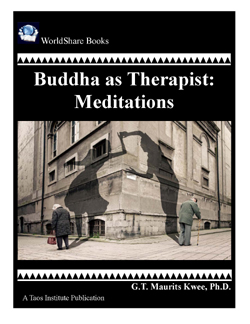 Buddhism 4.0 lays the foundation for Buddhist psychology/therapy, counseling, and coaching by providing a demystified, non-metaphysical, and salubrious practice toward meaningful life-fulfillment. The present volume highlights and explains the rich heritage of Buddhist thought by offering a mosaic of main themes in a compact way.

It narrates Gautama’s life from a clinical psychological perspective, illuminates pan-Buddhist core components against the backdrop of Ancient Greek Buddhism, and articulates known and lesser known past and recent data of Buddhism in a healing framework. It thereby touches Social Constructionism and Rational Emotive Behavior Therapy, and structures traditional Buddhism in a Western context while elucidating this important adjustment for a 21st century world.

Finally, it delivers hands-on meditation exercises as a modus vivendi rather than as a quick fix to end emotional suffering. Pristine mindfulness, heartfulness, breathing and sensing meditations, contemplations on death, loving-kindness and compassion, and smiling/singing exercises are included.

Buddha as Therapist: Meditations is a concise roadmap providing framework, insight, and understanding with regard to the Buddha as the first psychologist ever and to his psychology which is ready to be used in everyday life.

Maurits Kwee invites us to sit back and luxuriate in the insights and understandings that may help us to “realize our Buddha within.” Exploring Buddhism as a non-religion, with full potentials for transforming our lives from suffering and wishful thinking to joy and peace, Maurits offers a means for ordinary people to find a path to fulfilment. Erudite and intricate, the text creates the grounds for Relational Buddhism, a 21st century rendition of ancient wisdom.

Recommendation by Dr. Padmasiri de Silva, Ph.D.
(Adjunct Research Associate at Monash University, Australia and has been Visiting Professor at the University of Pittsburgh, USA, NUS Singapore and University of Waikato, New Zealand)

Writing of Compendiums has been a noteworthy feature of traditional Buddhist scholarship. The present work may be described as a modern compendium locating Buddhism along a number of dimensions. The psychology and the therapeutic resources of Buddhism is central to this study along with a focus on certain central Buddhist doctrines, interpreted in a more contemporary perspective – dependent origination, doctrine of kamma, issues regarding the self, and most important is the perspective developed towards the end, the relational structure in his methodological approach to Buddhism, which is also perhaps the vantage point of his contributions to Buddhism and therapy. The focus on Borobudur leaves in the mind of the reader an unforgettable impression which comes from Maurits’s early life and sustains the ups and downs of Maurits’ life, and hope he weaves a little song around it!

Book is availble as a free download. Please visit: http://www.taosinstitute.net/buddha-as-therapist-meditations