The rage of the lamas

New Delhi, India -- This book tells us about Tibetans living in exile in India and provides us with a glimpse of the historical-political developments in Tibet and the intricacies of its religion and spirituality. 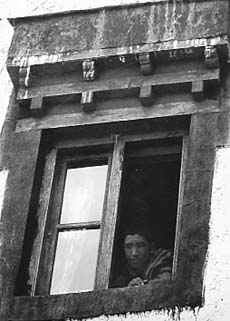 Buldrini, who spent 30 years in India as a journalist, begins his book with the daily reports of the Revolt in Lhasa in 1959, based on contemporary texts and eyewitness accounts. The reports are as graphic and crisp as the wire copy can be. He cuts to 1994 and reports the 40th anniversary celebrations of the revolt.

We see much that has changed in the attitudes and beliefs of the Tibetans and much that has remained the same: the fire to free their country from the Chinese and the resolve to protect their cultural heritage at all cost.

Buldrini walks the Linghar, the sacred way that circles Lhasa, the Tibetan equivalent of parikrama. He intersperses his own experiences with the experience of F. Spencer Chapman, who walked the Linghar in 1936. In this fascinating juxtaposition of the past and the present, the unswerving faith of the pilgrims shines gloriously.

The author details the controversy regarding the selection of the XIth Panchen Lama, which gives us an understanding of the importance of the second spiritual authority of Tibet. On the death of the Dalai Lama, it is the Panchen Lama who identifies the next reincarnation.

We get an exciting description of the clandestine escape of the XVIIth Kamrapa from Tibet and the Chinese control. We also get a peep into the violence that can erupt when there is hostility amongst Tibetan Buddhist sects: six followers of the Dorji Shugden sect came in the dead of night and murdered the Director of the Institute of Buddhist Dialectics and two other monks.

The highlights of the book are the interviews with Lobsang Dolma, XIIIth chief physician of the Khanghar hospital, who explains the principles of Tibetan medicine, and the Dalai Lama, who speaks on a variety of subjects. He speaks about his concern over the forcible settlement of the Chinese in Tibet: there are now 2.5 million Chinese in Tibet and only 7,00,000 Tibetans, posing a grave threat to the very survival of Tibetan language and culture.

He speaks about the growing opposition of the young Tibetans to his policy of non-violence; about the contradictions in Western materialism; about the link between spirituality and ecology; about the reasons for his winning the Nobel Peace Prize. When asked how he would like to be remembered, he replies: "As a human being who often smiled."

The writer gives life to what is essentially a documentary account by using a simple narrative style and bringing a wealth of vignettes and images to his story. The book concludes with the image of the funeral of Thupten Ngodup, who immolated himself during the 1998 protest against Chinese occupation and the world’s continuing indifference to this.

We join the thousands of mourners in Mcleodganj and, it is a measure of Buldrini’s success both as a writer and a sympathiser of the Tibetan cause that when the mourners cry "Bod Rangzen" (Free Tibet), we too want to raise our clenched fists and shout with them.