New Delhi, India -- I speak to you as just another human being; as a simple monk. If you find what I say useful, then I hope you will try to practice it– Dalai Lama 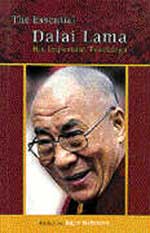 In these times when neighbours morph into messiahs and healers overnight, there are few who speak such unpretentious words. When he was recognised as the reincarnation of his predecessor, he was Lhamo Thondup, all of three years old. Since renamed Tenzin Gyatso, the fourteenth Dalai Lama turned seventy earlier this year in July.

Today he is the most visible among Buddhist leaders, the head of the Tibetan government in exile and the recipient of the Nobel Peace Prize. He has established institutions to preserve and promote Tibetan language and culture in India, canvassed the cause of Tibet worldwide, interacted with political and religious leaders of varied dispositions and faiths, and has been largely if not solely instrumental in keeping in check the impulse for violent revolution among his people.

The Essential Dalai Lama is a selection of the Dalai Lama’s speeches and writings that reflect the various facets to his persona: visionary, Tibetan Buddhist scholar and practitioner and mediator between apparently contradictory themes and cultural viewpoints.

Maybe the events that shaped his life compelled the Dalai Lama to shun dogma and adopt an attitude of compromise and pragmatism, sometimes even on core Buddhist tenets like non-violence. This endeavour to say the right things without antagonising anybody runs through most of the pieces in this volume.

However, the diplomatic turn of phrase does not take away from the Dalai Lama’s wisdom. He rues the fact that Tibet adopted an isolationist approach for centuries, ignoring the material well being of its people. He recognises happiness in this life as a legitimate ideal but says that focusing only on material development to the exclusion of inner life may not help achieve that ideal.

He recommends that classroom teaching adopt the method of dialogue so that it sows the seeds for non-violent resolution of conflicts. He identifies the human mind as both the cause of problems and the key to their solution. Replete with such insights the book serves as an appetiser for the reader to enjoy the main course at leisure.

Rajiv Mehrotra, decades-long host of a one-on-one talk show on television and a personal student of the Dalai Lama, has done an admirable job as editor.