'The Buddhism Primer - An Introduction to Buddhism' 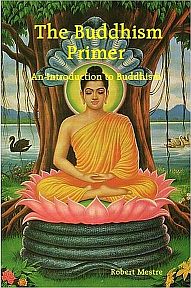 ORLANDO, FL (USA) -- The Buddhism Primer - An Introduction to Buddhism was written to give those new to Buddhism as well as those who have already began their journey an in depth understanding of the basic fundamentals of Buddhism.

The book begins with a detailed life story of Siddhartha Gautama, then takes you through the history of Buddhism to date with a Q&A of commonly asked questions dealing with all aspects of Buddhism. Readers are then given detailed descriptions of the different schools of thought.

The next section deals with Kamma(Karma) giving a detailed description of this commonly misunderstood facet of Buddhism. To give readers a working example of Buddhism the next two sections are the complete Dhammapada and the Metta Sutta. The book ends with a basic dictionary of Buddhist terms, and an outline of Buddhist holy days.

ABOUT AUTHOR
Robert John Mestre (Dhammasaavaka) is a property manager in Orlando, Fl, where he
currently manages two motels and two mobile home parks. He resides with his wife and three children (a fourth on the way).

Robert is an accomplished writer with many publishing credits and awards. He is also the founder of Simply Haiku, a journal for haiku and related forms. Robert has published five books.

Some of the lastest awards won are:

The book is available at Amazon.com, Borders, Walden Books, and other book stores.