Zen and The Art of Managerial Maintenance

It's trendy now, but Albert Low saw it 30 years ago: conflict exists in every being. Oh -- it also abounds in business.

New York, USA -- It came to him in a flash. Albert Low was sitting in yet another business seminar listening to yet another presentation, when it hit him "like a subterranean explosion. And then everything was different." All that number crunching, that theoretical stuff they were feeding to MBAs wasn't business! Business was inherent conflict! Business was yin and yang! Business was Zen! 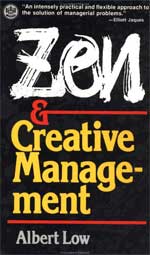 It was 1965 and Low -- then a manager at a fast-growing Canadian gas company -- had been dabbling in Zen Buddhism for four years. For the first time, he saw how he could use Zen to make sense of management. Over the next several months, he wrestled with the ideas that later became his book, "Zen & Creative Management," published in 1976 by Anchor Press.

Impassioned by his new in-sight, Low spent two hours pouring out his theories to the president of Ontario's Union Gas Ltd. Zen teaches that fundamental conflicts exist in every being and that striving to reconcile them is the cause of all suffering, and all life, Low explained.

Conflict abounds in business too -- in the turf wars between departments and in the competing demands of shareholders, employees, customers, and community. The conventional approach to settling the strife with trade-offs actually kills "the only source of growth," Low later wrote in his book. "If it's suppressed, fewer ideas will be generated and the company will tend more and more to conform with what it has done in the past." His recommendation to the president: "We've got to stop looking at the company as a set of budgets and sales figures. It's a whole organism, a field of tension."

With the president's support, Low brought this thinking to bear on a common source of corporate conflict: work and pay. Vowing that the two elements should be "in equilibrium throughout the company," Low set out to discover exactly what his coworkers did and how much money they deserved. To start, he tried to get agreement on definitions of concepts such as work, authority, and responsibility. "It caused an uproar," Low recalls. "I was asking people to redefine their whole experience. They felt I was trying to build an empire for myself."

More than a quarter of a century has passed, and Albert Low -- now the 67-year-old director of the Montreal Zen Centre -- has long since left the world of business. But there are signs that he has karma on his side. After disappearing out of print for several years, "Zen & Creative Management" has been reissued and sales have reached 75,000. One reason for this resurgence of interest, Low suggests, "is that the flower children are now the managers. So there's a potential receptivity to unorthodox ideas."

Low had hoped his colleagues would respond with a similar Zen-like mind to his efforts 30 years earlier. Instead, he says, they clung to the "comforting idea" that smart, well-trained managers could find the right solution to any problem if only they thought hard enough. From Zen, Low had learned that there are no right or wrong answers. For example, should a utility company dispatch as many servicepeople as possible to avoid customer dissatisfaction, or should it dispatch as few as possible to contain costs? "Managers are always choosing between two or more equally desirable resolutions," says Low, "but all of them are in conflict." The real managerial charter, he says, is to harness the energy of opposing forces. And that "requires a really creative act. Responding is about trying to catch up. Acting takes you to the future."

Now Low sees the "exquisite justice" of karma at work in the business world's embrace of Zen. "We're turning into a society that's got far more ambiguity," he says. "The notion of flag, the notion of family, the notion of the corporate entity -- all these structures are giving way." As a result, says Low, today's manager "needs to be totally at home in uncertain, yes-no-maybe situations. This is what Zen is all about."