Legends of the Three Kingdoms

Seoul, South Korea -- In March of the fifth year of his rule, the 49th king of Shilla, Heongang, was visiting the eastern part of his realm. Suddenly, thick cloud and fog enveloped his party, causing them to lose their way. The king was troubled by the sudden mist and asked one of his subjects what it meant, and was told, "This is but a trick of the East Sea Dragon." 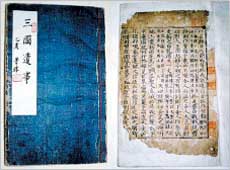 The king ordered his men to build a temple to the dragon nearby, and just as soon as he had uttered the order, the fog lifted. The dragon, delighted by the king's decision to honor him, brought seven children to the king's palanquin, who sang and danced praises to the ruler.

Of these children, who followed the king back to Seorabeol (the ancient name for the capital of Shilla, Gyeongju), one was named Cheoyong. Cheoyong married a beautiful wife and lived happily until one day an evil spirit fell in love with his wife. While he was away, the spirit changed into a man and had is way with her.

That is the story of Cheoyong from "Legends of the Three Kingdoms." This year marks the 800th anniversary of the birth of their author, the monk Ilyon (1206-89).

Where is the line dividing history and fantasy? In the "Legends," the question is meaningless. The book holds a wealth of valuable facts about Korea’s ancient history rarely found elsewhere, while also containing abundant fantastic stories and inspiration.

Among many other treasures, the book includes the Legend of Dangun, the mythical founding father of Korea, which tells of the union of sky and earth that gave birth to the nation. It also features the story of a bamboo flute called “Manpashikjeok,” which has mystic powers to bring forth the wind and waves and repel foreign enemies. Then there is the tale of the Su-ro, who was saved from a sea dragon when her husband sang the song, “Turtle, Turtle, give me my wife.”

But the "Legends" are also a record of the pain experienced by an intellectual in the hard times of the 13th century, in the final days of late Koryo following the Three Kingdoms, when the invasion of the Mongols left the country devastated. There are parallels, too, with our own time, when questions of the nation and its unity are on many people's minds.

The book is gaining renewed attention against the background of China's "northeast project," an attempt to co-opt Korea's ancient history as part of China's own. But the "Legends" clearly show us that the Three Kingdoms -- Koguryo, Baekje and Shilla -- were a historical Korean reality, and more: that our ancestors also ruled part of what is now Manchuria.