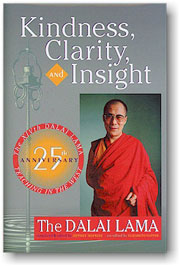 Snow Lion Publications has just released a new, hardcover edition of this significant title in celebration of both its own 25-year anniversary and the quarter-century of Western teachings by the Tibetan leader. Despite the subsequent publication of more than 60 volumes in English by the Dalai Lama, Kindness, Clarity, and Insight is considered by many to be his “heart message” to the West--a foundational key to understanding his other work.

These teachings dynamically and concisely introduced, and continue to introduce, the range of the Dalai Lama and his message--all of the topics he holds most dear--and is perhaps the most readable, yet substantive and wide-ranging, of the Dalai Lama’s works.

An enlarged photo section adds many previously unseen, archival color images taken by world-renowned photographers. The substantial new preface by the Dalai Lama’s translator at the time, Jeffrey Hopkins, gives a fascinating look at the behind-the-scenes maneuvering in the White House and elsewhere that brought about both the Dalai Lama's first tour of America and this book.

In 1981, the Dalai Lama and Hopkins puzzled the publishing industry by giving this important, first book of his teachings in America to Snow Lion, consisting at that time of a couple of individuals with no resources struggling to begin this start-up publishing house out of their kitchen and basement. Perhaps His Holiness was indeed prescient, because today Snow Lion has become the world's largest publishing company specializing in Tibetan topics.

And perhaps the Dalai Lama's choice has to do with an unusual friendship with co-founder and editor Sidney Piburn, a friendship that has spanned over thirty years. In fact, early on he advised Piburn on the direction his fledgling company should take, advocating a broad, non-sectarian publishing program that would systematically publish the important works of all the major schools of Tibetan Buddhism. “His Holiness said, ‘Don’t be biased,’ but,” says Piburn, “when it comes to this particular book, I’m biased! It’s a wonderful book and a real treasure.”

"Snow Lion is seminal,” says Professor Jeffrey Hopkins. “They are crucial in the development of the field of Tibetan studies and to furthering the public's interest in Tibet.” Professor Hopkins, professor emeritus of Tibetan studies at the University of Virginia, acted as translator when His Holiness first met with Snow Lion's founders in 1981. He describes the aspiring publishers as “young, idealistic, compassionately motivated, but nearly penniless.”

Today, according to Victoria Metzger of the respected distributor National Book Network, "Snow Lion has the best selection of Tibetan materials of anybody in the business." Following the Dalai Lama's counsel, the founders have produced more than 200 titles for both practitioners of Tibetan religion and scholars. Virtually all are still in print.

"Their growth came from demand,” notes Metzger, “not venture capital investment. That's really nice--and rare--to see in this age of the mega-publisher with huge consolidations and changes in the book selling and publishing market almost every month."

"The current renaissance in the study and practice of Tibetan Buddhism around the world is due in large part to Snow Lion's vision." says Donald S. Lopez, professor of Buddhist and Tibetan Studies at the University of Michigan.