New Delhi, India -- MANY lay readers, modern critics and even scholars of Buddhist canon generally believe, though mistakenly, that Buddha himself and the later Buddhists too are primarily concerned with the ways of attaining Nibbana (liberation) from the existential suffering, disquiet and unhappiness that we face in the lived world. 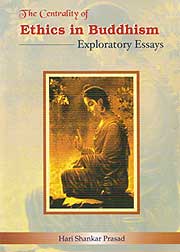 Many argue that the Buddhists being shunyavadins—nihilists, deny the existence of the world, the soul and God, which are generally regarded as the very foundations of our existence and the sources of morality. They, therefore, charge the Buddhists, in their theory and praxis, with social, moral and religious anarchism.

The author refutes this misunderstanding of the Buddhist worldview. He argues that this indictment is baseless and is the result of "deep ignorance, heightened arrogance, and condescending attitude."

Buddhism, according to him, is a crusade against "pernicious dogmas" as it propounds a radical theory and way of life, which is against the traditional Brahmanical teachings and practices. The traditionalists view the teachings of Buddha with a tainted eye and therefore are prejudiced against it.

Through the analysis of various metaphors, parables, signs, symbols and narratives used by Buddha in several sermons, Prasad has shown that Buddhism in all its hues and shades is through and through humanistic. To establish the dignity, autonomy and freedom of man it disbelieves in the existence of a creator, all controlling, omnipotent God. In it "gods, men, and other sentient beings are the parts of the same karmically arranged six-tier destinies called the ‘wheel of life’ (bhavacakra)."

Just as Buddhism demystifies God, it also does not consider self (atman) as something mysterious. Unlike other orthodox schools, it treats the self to be "a cluster of dynamic psychological factors like passion, desire, motives, intention, and will" which due to their dynamic nature can change into virtues through self-effort. No outside divine agency is needed for such transformation. Human beings with all their "epistemic capacity, intelligence, emotions and the inherent sociability" alone are responsible for it.

To change the negative passions into positive virtues, Buddhism teaches two types of meditation techniques. These are called Samatha—the calming meditation and Vipasana —the insight meditation. While the former "calms, silences, and tranquillises the mind and reorients its focus on a positive object," the latter develops "a penetrating insight into the true nature of things."

To establish his thesis that underlying all the preachings concerning the cessation of the existential suffering, Buddha had a "grand programme of ethicisation of the world," Prasad has besides the Introduction divided his book into six sections—Background of Buddhism; Buddhism on Ethics and Karma; Buddhism and Interculturality; Buddhism on Knowledge, Reality, and Self; and Buddhism and Perspectives on Time.

In the first three sections, Prasad has carried out an informed and in-depth discussion of the foundation of Buddhist ethics and morality, the Buddhist law of karma, samsara and rebirth. In these chapters he has compared and contrasted the principles and practices of Buddhism with those prevalent in Hinduism. He is successful in showing that Buddhism avoids "the two extremes of metaphysical holism and strict individualism."By rejecting both the religious and metaphysical holism it advocates "ethical holism." The realisation, the experience of shunyata—emptiness, "brings a radical change in one’s thinking, attitude, habits, dispositions, values, and behaviour," which in turn develop an attitude of ‘ethical holism’ in him. The ethical holism advocated by Buddhism thus is the middle path. It is humanistic in nature as it "emphasises on the psychological transformation and ethical development of a person" through his own effort, his own experience. It has an existentialist outlook, as it does not depend on an external agency.

While the first three sections comprising seven chapters are directly concerned with the central theme of the book, the issues discussed in sections four, five and six comprising nine chapters at the most can be said to be only peripheral to the main thesis of the author. These chapters in the main deal with the philosophical issues of interculturality, post-modernism, realism, epistemology, and time.

Being well-versed with the original sources of Buddhism and being its hard core advocate, the author has given an authentic Buddhist response to these issues, yet they remain alien to the discussion on Buddhist ethics. The author has at no place explained his rationale for including these sections and chapters in the book. These chapters could have formed another valuable book on Buddhism, providing the singular advantage of not deterring those readers who shun a book because of its thickness!

Because of its profundity, which is the outcome of the author’s reliance on the original sources, and comprehensive bibliography, I strongly recommend the book to the scholars as well as lay readers interested in Buddhism.