One of the world's earliest novels still enchants

Tokyo, Japan -- This year's 1,000th anniversary celebration of "The Tale of Genji" -- widely known as the world's first modern novel -- is an important occasion to ponder Japan's contribution to world literature. 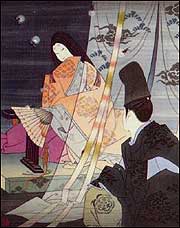 Completed in 1010 by the aristocratic Lady Murasaki Shikibu, "The Tale of Genji" has enthralled readers from all over the world with its romantic and elegant world. The novel offers vital insights into Japanese classical aesthetics and the sociopolitical conditions of the Heian period (794-1185), considered as Japan's cultural peak. Although there are some speculations as to the accuracy of the year, it is commonly believed that "The Tale of Genji" was already in existence by 1008.

The Heian period, known as the most peaceful time in Japan's history, blossomed into a world in which poetry was the language of courtship and love, and the keenness for the beautiful was the court's state of affair. It was a time of delicacy and sophistication. It was a time that marked the beginning of the importance of women writers that has so far been unequalled in other parts of the world.

My first encounter with the novel was almost 15 years ago in a seminar class on Japanese classical literature. The sheer length of the novel, a copy of which was always brandished by our professor to intimidate us, drove us into seclusion for days in order to complete reading it. That I have read Edward Siedensticker's translation of it in autumn amidst the panoramic view of our Tokyo campus was most inspiring.

Autumn is most exquisite in the novel. The colorful though sad landscape serves as a poetic backdrop to the numerous love affairs of the protagonist Hikaru Genji -- the "shining prince" -- and his often dissatisfied and embittered women. Genji is the son of a court lady whose good favor with the emperor was deeply envied. But coming from a family of lower rank, her intimacy with the emperor does nothing to ensure Genji of royal status. Yet, Genji enjoys the best of both worlds as a commoner and member of the royal family.

Known as a refined, handsome and compelling presence, Genji's first love affair is with Fujitsubo, his stepmother. Realizing too well the folly he has gotten himself into, the young prince ends up pursuing one woman after another. He woos through his poetry and artistic skills, conquers, moves on and conquers even more. He stands out for his "unfailing loyalty" to remember and to provide for each and every one of them.

Although the novel focuses on the life of Genji, some argue that it is actually the women in his life -- a whole variety of them -- that instill in the novel its emotional texture and feminine sensibility. In a recent Kyoto event to launch the novel's commemoration, written about by Yomiuri Shimbun, Jakucho Setouchi, a Buddhist nun who translated the novel into modern Japanese, comments that 70 percent of the women in the novel opt to become Buddhist nuns to escape their loneliness and yearning for the prince.

What the novel has contributed to the study of literature is expansive. Professor Barbara Ruch* cites Virginia Woolf in her July 1925 review of the novel as envious of the courtly world in which Lady Murasaki lived. The narrative's sustained power (it covers three generations and the English translation spans than 1,000 pages) and the depth of its psychological study of the characters in and out of love, all make for a remarkable achievement.

It is no wonder that many Japanese writers pay homage to the literary masterpiece. Kawabata Yasunari (1899-1972), in his acceptance speech for the Nobel Prize for Literature in 1968, refers to the novel as the unequalled "highest pinnacle of Japanese literature." In the same way, writers like Tanizaki Jun'ichiro, Yosano Akiko and Enchi Fumiko translated and reworked the novel into modern Japanese. All of them found in it the affirmation of their cultural identity.

The world is enriched as well by Lady Murasaki's splendid work. That it has been studied continuously through generations and translated into other languages only attests to its power to speak of human emotions in its most intense, painful and beautiful form, which every one of us knows only too well.