'The Open Road: The Global Journey of the Fourteenth Dalai Lama' by Pico Iyer, a portrait of a man's life and mission.

Los Angeles, USA -- "The pope?" Josef Stalin once asked a Western diplomat, according to a cherished tale preserved in countless history books. "How many divisions has he got?" 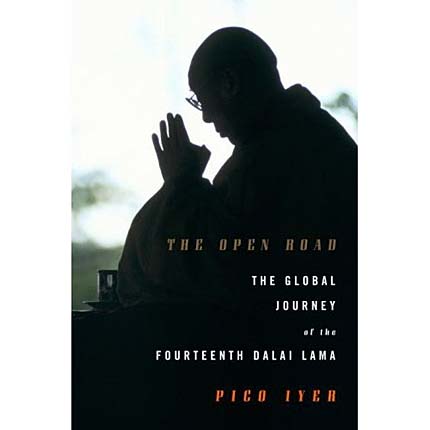 Now that the long-simmering conflict between Tibet and China is boiling up again, the same question is surely being asked these days in Beijing about the Dalai Lama. The headlines in the daily papers provide one good reason to open Pico Iyer's "The Open Road," an intimate and insightful biography of the self-described simple Buddhist monk who is also (and remarkably) a Nobel laureate, a friend of popes and presidents and a player in world politics -- "one of the most visible figures on the planet."

Iyer, a journalist and novelist, is a veteran contributor to Time and the author of books that can be approached as cultural criticism, political commentary and travel literature, sometimes all at once. The son of a prominent Indian philosopher who was an acquaintance of the Dalai Lama, Iyer was raised in both England and California and lives in Japan, a fact that may help to explain his ease in crossing boundaries of various kinds. Iyer was 17 when he met the Dalai Lama for the first time on a family trip to India, and he has remained in contact over the years. All of these credentials come into play in "The Open Road," which succeeds as a work of biography, history and memoir.

The Dalai Lama is an elusive subject for a biography precisely because he is so many different things to so many people. He fled Tibet in 1959, after a failed uprising against the Chinese, and his sanctuary in India functions as a government-in-exile for conquered Tibet: "[E]ven as he's trying to support six million people he hasn't seen in half a century," explains Iyer, "he is obliged to create a new Tibet among those who have seldom or never seen Tibet."

At the same time, he is a high cleric who blesses babies and children in wheelchairs and earnest seekers of all ages. His court includes oracles and a rainmaker, and he "sits in front of thangkas, or scrolls, that swarm with grinning skulls and lascivious deities whose meanings the rational mind can't grasp." Then, too, he is now a pop-culture icon, invoked in Hollywood movies and replicated in $200 limited-edition dolls. On tour in North America, he was booked into (among other such venues) the 50,000-seat Toronto SkyDome, which houses baseball games and rock concerts. "It was as if, as the press frequently put it, a president was visiting," notes Iyer, "in the company of Mick Jagger."

The Dalai Lama is an entirely agreeable kind of religious leader for those who cherish a secular democracy, which explains why so many Westerners who reject the wisdom and authority of a pope or a televangelist or a Hasidic rebbe are willing to listen to someone who was identified as the current incarnation of the Dalai Lama at age 2 after a search party of monks followed the arcs of rainbows to his dwelling place. "We have enough religions," he once told an interviewer, "but not enough real human beings."

Above all, Iyer wants us to understand that the Dalai Lama is someone who transcends the concerns that are defined in religion by ritual, symbol and dogma and in geopolitics by lines on a map. Indeed, Iyer sees him as the ultimate globalist. "In Tibet the Dalai Lama was an embodiment of an old culture that, cut off from the world, spoke for an ancient, even lost traditionalism," writes Iyer. "[N]ow, in exile, he is an avatar of the new, as if, having traveled eight centuries in just five decades, he is increasingly, with characteristic directness, leaning in, toward tomorrow."

"The Open Road" shows us the Dalai Lama in all his various aspects, "switching . . . at lightning speed from monk to head of state to philosopher-scientist to regular man." We are told, for example, how he rises at 3:30 a.m. every day and spends the first four hours each morning in meditation. But we are also told that "he looks like a middle linebacker," according to journalist Abe Rosenthal, and he loves to take apart watches and put them back together again. He tried to make himself into a vegetarian but gave up after falling ill with hepatitis B; his mother had warned him that "his Himalayan constitution could not survive without meat." The reverent crowds who gather to hear his teaching and receive his blessing might see him pull out and use a toothbrush, and his spontaneous laughter is one of his most famous traits.

Iyer is not himself a Buddhist, but he seems to embrace the Buddhist struggle for enlightenment. "The Open Road" means to wake up the reader to the human being who sometimes disappears beneath the myth: "In the Age of the Image, when screens are so much our rulers, anyone who wishes to grab our attention -- and to hold it -- does so by converting himself into a 'human-interest story,' translating his life into a kind of fable, . . . " Iyer writes. "The Dalai Lama, by nature and training, is in the odd position of trying to do the opposite: he comes to us to tell us that he is real, as real as his country, bleeding and oppressed. . . ."

The recent agonies in Tibet prompt us to wonder whether and how Iyer might have dealt with current events if they had taken place six months ago. Even so, the book allows us to understand, for example, what the Dalai Lama meant when he threatened to "resign" if the violence in Tibet did not abate. He is, among other things, the head of state of the Tibetan government-in-exile, and that's the post he might yet abandon. But one cannot resign an incarnation: "He is a simple man," says his younger brother, "whose job it is to be Dalai Lama." *