Rio de Janeiro, Brazil -- Born in India 2.600 years ago Buddhism was only noted by the West over the past century and as its ideas spread a new form of Buddhism, the West Buddhism, is emerging leading people to ask what these old ideas can offer to the western men and women of the 21st century. 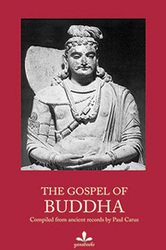 Yanabooks is pleased to announce the launching of its first book, "The Gospel of Buddha", an updated edition of a classical book on Buddhism that throws light on the core ideas of Siddhartha Gautama, the founder of Buddhism, an eastern faith that is being reshaped in the West.

Since 560 BC Buddhism, currently the faith of 400 million people, spread from India to Tibet, China, Southeast Asia and Japan giving birth to new forms of Buddhism as it absorbed the local culture. But in the last century we are seeing a new move as Buddhism travels west. The so-called West Buddhism (or Western Buddhism) is taking shape as westerns abandon the prevailing ritual aspects of oriental Buddhism and shift the focus to its philosophical and ethical principles.

Western Buddhists believe that the ideas of Buddha, its concepts of ethics, compassion, mindfulness and meditation, can offer answers to the crucial questions of modern life, relieving stress and creating harmony and health at a personal level. At a social level we see in the news the action of the so-called Engaged Buddhism, term created by Thich Nhat Hanh and practiced by the Tibetan Dalai Lama and others.

The Engaged Buddhism tries to apply the Buddhist insights to situations of social and political distress and considers the personal development a part of this process. Another point stressed by Western Buddhists is that it offers to individuals the option of an inner journey, being not necessary to be a member of a church, or to have a guru or even to believe in a personal God.

The core ideas of Buddha can be found in "The Gospel of Buddha". This book, that introduced many westerners to Buddhism, was first published in 1894 and has sold about 3 million copies. The author, Paul Carus (1852--1919), a German American writer and a pioneer on the interfaith dialogue, collected from ancient records many accounts of Buddha's life and fashioned a coherent and gripping narrative similar to the Christian Gospel of Jesus.

Yanabooks is a new publishing house and on-line bookstore with a focus on Buddhism, Esoterism, Theosophy, Vedanta and Old Traditions, managed by Alexandre Mello, 53 y, a practicing emergency physician in Rio de Janeiro. Mr. Mello jumped in the Internet bandwagon in 1993, when his two-year old BBS, called "Seculo 21", start to connect the Internet by phone and provide Email and Usenet News to its users. In the nineties he gave many lectures on Esoterism and Internet and was an active member of esoteric organizations. Mr. Mello wrote articles, published by Brazilian magazines, like "Medicine and Virtual Reality" (1991), "Computers and Visual Strain" (1992), "Internet, World Data Network" (1993) and "Internet and Tourism" (1996).