New Delhi, India -- The author, an American born as David Luce in Jersey, after graduation in history developed a strong interest in eastern religions, especially Buddhism. He wrote this book after becoming a Buddhist, influenced as he was by the life of the Buddha. 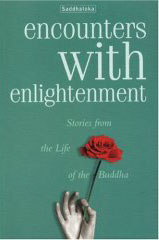 We all are aware that Buddha lived in northern India 2,500 years ago and that after attaining enlightenment at the age of 35 years, he spent the remaining 45 years of his life wandering over the Magadha and Kosala kingdoms.

Accounts of the Buddha’s teachings were memorised and handed down by his monks to the following generations over the centuries. However, according to Saddhaloka, the author of this book, only one genuine collection, known as the Pali Canon, was handed down in Sri Lanka about 500 years after the Buddha’s death.

Taking accounts of the Buddha’s early life from the Lalitavistara, he talks of the warrior race, the Sakyans, whose King Suddhodana had a son called Siddartha, who despite being provided the “sweetest pleasures of worldly life” and having a son Rahul, was engulfed by a strange and restless mood of unease and discontent. When moving out of the city he once saw an old man, at another time a sick man and later a dead man which touched him deeply. Confronted by this inevitability of illness and old age, the Buddha thought to himself, ‘But, how can one make any sense of a life so soon overtaken by old age, always vulnerable to sickness, and bound to end in death? How can one find any happiness, any pleasure, in such a life?”

These questions troubled him so much that he “became distant even from those closest to him” and somewhere deep within he sensed, “there must be an answer, a key to this mystery, and that he must do everything in his power to find it.” Restless and preoccupied, he went out once again and saw a fourth sight - a wandering holy man with a begging bowl in his hand and clad in a ragged robe. So, one day, in the dead of the night, he took to saffron clothes and left home to become a wandering holy man. He wandered from place to place with his tribe of followers increasing and finally sat under a Bodhi tree to meditate till he received enlightenment.

What is interesting and different about this book is that certain aspects of the Buddha’s life have been very touchingly described and among these is his death, regarding which the author says that the Buddha lay down under sal trees and his faithful companion Ananda, began to weep against a doorpost. ‘I have still so much to learn, and my teacher who is so kind will soon be gone!’ he wept. The Buddha sent for Ananda and told him gently, “Come, Ananda, don’t weep. Surely you must understand by now that we have to be separated from all we love. How could anything which comes into being not also have an end?”

The Buddha’s last words were: “Impermanent are all compounded things. With mindfulness, strive on.” Then entering a deep meditation, the Buddha left his body.

Though familiar with Buddha’s life, one never tires of reading about him as his timeless wisdom and inspiring life can never fail to influence mankind in some way or the other.