Author and teacher, Robert Sachs, interviews some of the most influential spiritual teachers and thinkers of our time in his newest book, The Wisdom of The Buddhist Masters: Common and Uncommon Sense

Los Angeles, CA -- When most people think of Buddhism, they think of pacifism - of a serene Buddha detached from the world. 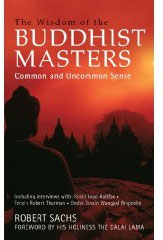 But while the Buddha is serene, his detachment is not aloof or uninterested in the rest of us. In fact, the Buddha is one hundred percent engaged; body, speech, and mind all instruments of love and compassion twenty-four seven.

Buddhism is informed, intelligent, compassionate, and skillfully engaged activism. It's goal is peace, but it does not shy away from confrontation and conflict. Consider the monks of Viet Nam and Myanmar. Consider the Tibetans. And this is what author and Buddhist practitioner, Robert Sachs says people need to know about the Buddha and his teachings.

When he wrote The Buddha at War: Peaceful Heart, Courageous Action in Troubled Times, this is the point Robert was trying to make - and readers got it. With the book's enormous success, his editor at Watkins Publishing wanted something more, though.

Beyond the existential and absolute truths on Buddhism covered so often in today's literature, he asked Robert if world Buddhist leaders would be so forthright as to comment on current events and the future of our planet. Would any teacher be willing to go on record to speak about terrorism, the war in the Middle East, drug abuse, population, global warming and the environment - to name just a few topics forefront in the news? And just as - if not more - importantly, what would they say to allay our fears and help us step into the future in way that makes our intentions and actions part of the solutions?

So Robert contacted nine of the world's foremost Buddhist scholars and teachers, both from the East and the West. They have traveled and taught around the globe and have seen with their own eyes the effects of each of the problems addressed in this book. These teachers are:

Each was asked questions from the same questionnaire. And based on their deep meditative awareness and their experiences in traveling and teaching around the globe, they answered.

The Wisdom of The Buddhist Elders: Common and Uncommon Sense is the result of Robert's interviews of these luminaries and his reflections on their words. This is a book of Buddhist wisdom for everyone. The interviews do not reflect a unified chorus or set dogma, but rather, like facets of a diamond, each contributes sanity and clarity in whatever matter each teacher thinks they can best illuminate. The reader will sometimes be shocked at their candor, daring, even political incorrectness. But, The Wisdom of The Buddhist Masters will change how each one of us sees our world and inspire everyone to become - or at least to know - that they are or must become the change they seek in the world.

The Wisdom of The Buddhist Masters will officially be released on September 2nd, 2008. It has just recently been made available online through its US publisher, Sterling. Robert Sachs is available for interviews.