New York, USA -- There was a time when the Dalai Lama was enamoured of Chairman Mao and communism. “Mao impressed me in many ways,” he writes in The Leader’s Way:Business, Buddhism and Happiness in an Interconnected World “He explained (communism) as a system where the capitalists would no longer exploit workers.” 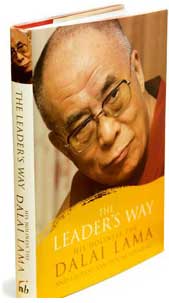 The admiration didn’t last. “(Mao) told me that religion is like poison. He knew that I was a Buddhist, so his comments made clear to me that the friendship he had shown was not genuine.”

And as it turns out, along with karuna (compassion) and ahimsa (non-violence), Buddhism also values free enterprise. “Buddha recognized entrepreneurship as a valuable activity,” the Dalai Lama writes. “He encouraged entrepreneurs to be successful by being reliable and having an eye for what should sell.”

Now, he lays store by a “responsible free market” economic system as our best bet to achieve and spread happiness worldwide. So, when Laurens van den Muyzenberg, an international management consultant, requested him to address how Buddhist thinking could help capitalism “bring about a more peaceful and sustainable planet”, he agreed. The result is The Leader’s Way, the fruit of a long collaboration between the two.

Business, with its focus on “production, profit and growth”, might seem to have little in common with Buddhist teachings of compassion and welfare, admits Van den Muyzenberg, but he points out how a closer look shows that both are concerned with happiness and making the right decisions. The Leader’s Way essentially tells its readers to live and work according to the Buddhist concepts of Right View and Right Conduct. As van den Muyzenberg explains, Right View determines the intention behind taking a decision and Right Conduct, how that decision is translated into action by a company and its employees.

If you master these two “Rights”, according to Buddhism, you will attain happiness and also spread it. The key to this mastery lies in training one’s mind through meditation. By following the process of meditation as outlined in the book, one can learn to “eject” unwholesome tendencies and “replace” them with wholesome ones—so self-confidence ejects lack of self-confidence; humility ejects pride; equanimity ejects craving for power, wealth and fame; vigour ejects dullness of mind; and so on.

The book spells out the techniques of meditation and provides testimonials by CEOs on its efficacy. When her partner cheated Thitinart na Patalung, the chief executive of a successful Thai diamond company, of all her money, she became depressed and angry. But with meditation, she got rid of these negative emotions. Taiwanese architect Kris Yao trained his mind to stop craving to be the best and brightest in his field; instead, he focused on doing what was best for his clients. His creativity soared.

The benefits of meditation, Buddhist or otherwise, are well known, and The Leader’s Way doesn’t really tell us anything new. However, by its brief instructions, examples and illustrations, it does reach out to the uninitiated and point them toward a practical and possibly effective means of self-improvement.

The first section of the book is “Leading yourself”; then comes “Leading Your Organization” and finally “Leading in an interconnected world”. As the theatre and scope of action expands for the reader—from the individual to the global—the insights become less and less original.

The book doesn’t really say much that is new. It spells out the basic philosophy of Buddhism as it relates to the individual and individual action in simple, clear language; and it outlines some of the dilemmas and contradictions inherent in capitalism and globalization. But there is nothing fresh about its tips on how to negotiate these contradictions— at the personal, organizational or global level.

The Dalai Lama’s take on free market economy and globalization doesn’t tell us anything that magazines, books and college texts haven’t already told us. For instance, the Buddhist view of profit is: “Profit is a fine aim as long as it has been earned honestly.” Not very different from the non-Buddhist view, it turns out. Among other things, the CEO is exhorted to be mindful of extreme salary disparities, exercise corporate social responsibility, aim for a diverse workforce and invest in poorer parts of the globe.

We are also told that “Money can’t buy happiness.” (Though, the section does succinctly analyse the nonlinear correlation between the two.) Case studies add some colour: Indian entrepreneur Tulsi Tanti’s quest for wind energy solutions; Unilever’s microcredit initiative in India; IBM’s determined push to increase workforce diversity and GE CEO Jeff Immelt’s successful health initiative in Ghana illustrate entrepreneurship and leadership. Linking them with Buddhist principles, though, seems tenuous. The logic seems to be: These initiatives exemplify Buddhist principles because they aim to do good.

The Leader’s Way then serves well as a refresher or primer of the universal values that should anchor our day-to-day conduct— as individuals and as members of a professional organization. Free marketers will be happy that the Dalai Lama - with his moral stature - has unequivocally backed capitalism and globalization, with the usual riders about mitigating its excesses.