Bits and pieces of teaching Buddhism

Bangkok, Thailand -- Histories of Buddhism in Southeast Asia have imagined a clear break between premodern and modern practices. In the past, they claim, each wat (temple) and abbot was very independent. 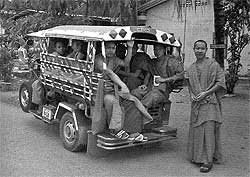 Teaching depended heavily on moral tales, especially the Jataka stories. The teaching style was predominantly oral. Then, beginning in the mid-19th century, there was a revolution. Printing made available standard editions of texts. Western scholars invented the idea of a "canon" of older and superior texts. The court in Siam and the colonial administrators in Indo-China imposed a "purified" teaching based on this canon, and a more regimented organisation of the monkhood.

Justin McDaniel has studied Buddhist education from past to present. Unlike most scholars, he based himself in the "Lao" periphery of Lanna, Laos, and Isan. He ordained for a time in a small wat beside the Mekong River and tramped all around this periphery, peering into wat libraries, listening to sermons and quizzing novices. He concludes that the break between premodern and modern was much less clear than it seems.

He cannot find out very much about premodern teaching in the wats in either Laos or Lanna except for two things. First, abbots paid a lot of attention to collecting and copying manuscripts. Abbots who did this on a large scale became honoured and famous. Often they distributed copies of manuscripts over a wide area. Second, the most common form of manuscript found in the wat libraries and used by the monks and abbots are not the classical texts, but nissaya (with also the similar vohara and namasadda). These are literally "supports" or crib-guides for a monk delivering a sermon or homily.

Typically, these would be based around a textual extract, usually a story from the Jatakas or the life of Lord Buddha. Most of the text would be in the vernacular language but with key religious terms in Pali. The guide would include glosses on these Pali concepts, allowing the sermon-giver to "lift" this word for the audience's attention, and spell out its meanings. He might then sidetrack into related Pali terms or even Pali grammar. Or he could shoot off into another story that revolves around the same word. Or he could talk of the present day and draw out some moral lessons. Finally he might circle back to the original story and keep on going.

These nissaya "supports" are not pure texts but "bits and pieces", including text extracts, Pali glosses, grammar rules, analogies, cross-references and mantras for protection from various threats. McDaniel argues that the Pali language and the old texts were greatly valued as the stock of learning, but were not treated as sacrosanct. Rather, the texts had to be translated into the local language and adapted to the needs of the audience before they became good teaching material. With these crib-guides, and a lot of repetition, the sermon-giver could teach some Pali and some ethical values at the same time. As these texts were copied, annotated and passed on, they might grow more and more remote from the original text. There was no standardisation, but infinite local variety. 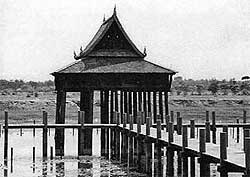 Then in the late-19th century, Siam took over Isan and Lanna. Impressed by Western scholars of Buddhism, King Rama V took on the idea of a "pure" canon. His half-brother, the prince-patriarch Wachirayan wrote a swathe of standard printed textbooks. Two Buddhist universities were founded. The Sangha Act of 1902 imposed a standard syllabus and exams for Buddhist education. Administrators in French Indo-China had parallel ambitions.

But McDaniel shows that much less changed than usually imagined. Very, very few monks take the exams. None get thrown out for failing. Most wat schools have no canonical texts. McDaniel recounts how he spent a day searching for the key to the library cabinet in one wat only to discover it contained a single standard textbook that had never been opened. The nissaya palm leaf crib-guides have disappeared, but have been replaced by printed forms, which have almost exactly the same function. Some are even printed in the same shape as a palm-leaf manuscript with a stiff cardboard cover to imitate the weight. These printed versions are more standardised but they still contain the "bits and pieces" characteristic of their predecessors. McDaniel saw these in use in Laos, Lanna and Isan, with scarcely a canonical text in sight.

McDaniel asked abbots and novices what was in "the canon". They answered that virtually anything originally in Pali qualified, including Jatakas, commentaries as well as local histories along with the texts supposedly originating from Buddha's own teaching.

Of course there is an elite of monks who take the exams and climb the sangha hierarchy. There are also new modish religious practices such as meditation, and innovative centres such as Dhammakai. But McDaniel stresses that much teaching and practice in the wat goes on as it always has. He also finds this rather comforting. Instead of studying a canon or pristine knowledge, the monkhood has been focused on the needs of its audience for protection, solace and prestige.

Scholars tend to stay in the metropolitan centres and pore over texts. This intimate and engaging study is a brilliant counterweight to that tendency. It confirms the central role of the teacher, and the continuing importance of an oral tradition. McDaniel is a student of Pali and Sanskrit, with a great passion for manuscripts. Only someone so well versed in the texts could put them in their place.