Do You Just 'Eat Sleep Sit'?

Singapore -- I came across the book ‘Eat Sleep Sit’ at Bugis Junctions’ Books Kinokuniy. Am not ashamed to say I was first attracted to the book by it’s Zennish design. With its title, it was enough to make me turn the hardcover book around to read its blurb. 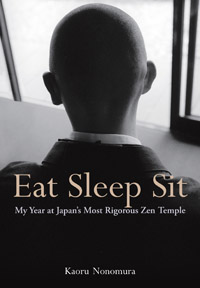 I would had bought the book right on the spot if there was an open copy for browsing. But the price was a little steep too. Unsure of the contents and its Dharma value, I thought I should wait for its paperback version. Well, I was glad that I made that decision… because just a few days later, moonpointer.com received an email fromt the publisher asking us if we would like to receive a free copy of the book for reviewing on this website! I guess the photos and articles on our Japan adventures showed us to be potential reviewers!

Eat Sleep Sit narrates a year in the life of a thirty year old designer (Kaoru Nonomura) who decides to leave everything in his mundane world to seek the meaning of his own existence at the Zen temple Eiheiji ??? in the deep mountains. Eiheiji is one of two main temples of the Soto sect of Zen Buddhism. Its founder was Eihei Dogen ???? and is located about 10km east of Fukui in Fukui Prefecture, Japan. Eiheiji is famous for having the most rigorous ascetic Zen training in Japan. As Nonomura strikes the wooden gong, stepping into the compound of Eiheiji, it marked the beginning of his life-changing experience. Thus began my absorbing read.

I won’t try to hide my stupendous discovery of how the Zen monks were training in Eiheiji. The daily verbal and physical abuse as described felt almost ‘unbuddhistic’. At times, I wondered if I was reading about a man going through vigorous military training, rather than about a monk going through a radical mind-altering routine.

Furthermore, the trainee monks are described to have little to eat, while having a lot to do! It seemed like the extreme asceticism that the Buddha strongly discouraged? Before I go any further, I have to remember that I’m not here to criticising the training method – am just sharing my impressions.

I must say that beyond the poetic contents of the book, it is really a well-translated book. I almost wish that I could read the Japanese version. Translator Juliet Winters Carpenter did a really wonderful job. The English translation is such that it compels the reader to read on, and I think she succeeded in bringing out the spirit of the book. At first, I didn’t expect it to be so heavily narrative. And yes, she did successfully lead me through the ritual of cleaning the corridor, the precise striking of the bell, the intensive leg-breaking sitting and more!

What I found disappointing with the book despite its overwhelming narrative descriptions are its few little personal reflections. In the Afterword of the Japanese paperback edition, Nonomura said he was essentially no different from before… a statement which I found most disheartening, other than the bits of sadness the book detailed. After a year in Eiheiji and spending five years recollecting every moment in the temple, he only has the following realisation:

“At Eiheiji I learned the courage to affirm everything in the past and the joy of living mindfully in the present, out of which the future will be born. I like to think that that courage and joy will stay with me, somewhere inside, and that someday when I burst into sudden loud weeping or wish out loud for death, I may remember them. Then I think I’ll know what my year at Eiheiji was all about.”

Somewhat depressing and serious, yet filled with warmth and sincerity, it’s almost amusing to read about the wide range of vegetables that the Nonomura was able to remember, all of which he listed. I remember exclaiming on what a superb memory he had, but only to next remember he was complaining how he had difficulties memorising verses in the sutras. Well, to conclude, if you are the kind who enjoys vivid narrative writing, Eat Sleep Sit is for you, for it is a superbly detailed book on how Japan’s most unbending Zen monastery operates, on how it trains monks. A true eye opener!