Shanghai, China -- A concert of Buddhist music - classical, contemporary and crossover - will be staged during the upcoming Spring Festival holiday to express hopes and prayers for a happy Chinese Lunar New Year. Li Anlan reports. 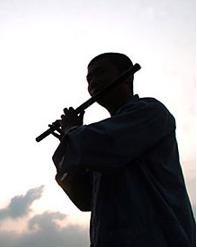 Buddhist music, which originated in Buddhist religious rituals, is increasingly popular among ordinary music lovers for its uplifting, soothing qualities.

People feeling stress find a calming and comforting power in the ancient chants and music performed with traditional Chinese musical instruments. Musicians increasingly are tapping into this traditional form of expression.

Buddhist music is frequently described as having elegance, dignity, depth, clarity and sincerity. It can be both tranquil and joyous.

On February 22, an "Illuminating the Soul" concert of Buddhist music will be staged at the Mercedes-Benz Arena, with prayers for the coming year. The Spring Festival will begin from February 10 and go through 24.

The concert will feature Taiwanese pop singer Chyi Yu, mainland singers Sa Dingding and Sangji Pingcuo, and a monastic choir and traditional orchestra from Shanghai's Jade Buddha Temple, as well as other musicians.

Music, singing hymns and chanting in Buddhist temples are considered a way to touch deep emotions, inspire and promote reflection and meditation.

Buddhist music originated in the dignified chanting of scriptures and sutras in monasteries in India and developed different characteristics as Buddhism traveled to other countries. It acquired both folk elements and those of imperial courts.

During the Eastern Han Dynasty (AD 25-220), Buddhism arrived in China. It became more than chanting and incorporated the tonality of Chinese folk music. Scriptures were translated into Chinese and without traditional hymns, monks adapted classical folk songs along with court music.

Cao Zhi (AD 192-232), the poet son of Wei Emperor/warlord Cao Cao (115-220), was renowned for his compositions and singing. He wrote the first Buddhist hymn composed in Chinese style, "Yushan Fanbei," which was the foundation for Chinese Buddhist music, later also also called fanbei in Chinese.

Buddhist music, which is rooted in religion, was beloved by many Chinese rulers and was deeply influenced by several emperors.

Emperor Wu of the Liang Dynasty (AD 502-557) loved Buddhist music so much that he himself wrote several compositions, such as "Da Huan" ( "Great Joy"), "Tian Dao" ("The Heavenly Way") and "Mie Guo E" ("Cessation of Evil and Wrongdoing").

Today Buddhist music is being modernized. The words are simple and easy to understand, all in Chinese, and the musical style is more contemporary.

"Buddhist music is very soothing and quiet, close the heart, and it can relax the nerves to achieve a more peaceful state of mind," says Master Shengjing, a singer in the Jade Buddha Temple monks' choir.

Traditionally Buddhist masters chanted, with instrumental accompaniment. "As we formed the choir, we made it easier for the public to accept," says the master, who has been with the group for five or six years.

Some orchestra works can be very festive and loud. Folk instruments add diversity, color and richness.

It commemorated the 130th anniversary of the birth of Master Hongyi, a legendary Buddhist monk who was a master in music, painting, drama, calligraphy and poetry. He wrote "Farewell Song," a short song familiar to many Chinese people.

No longer used only as a spiritual aid in religious settings, Buddhist music is reaching the general public. New compositions, both traditional and crossover, attract many listeners.

"More young people are listening to Buddhist music because of the social and working pressure in modern life," says Master Shengjing. "Some come here for short-term classes and music is part of them."

Born in the Inner Mongolia Autonomous Region, she sings in three languages: Mandarin, Sanskrit and Tibetan as well as a language she invented, which expresses emotion through "meaningless" words.

Her album "Alive" in 2007 combined pop with traditional Chinese music, including Buddhist music. It was a risky but creative merger of east and west.

Critic Robin Denselow of The Guardian rated the album with four stars saying, "The Tibetan-influenced male chanting is set against a subtle use of electronica that is far more successful than on the recent album by that other Asian diva, Uzbekistan's Savara Nazarkhan. Sa Dingding's blend of the traditional east and modern west actually works."

At the concert, she will sing her compositions "Shen Xiang," ("Holy Incense"), "Alive" (in Sanskrit) and "Xi Ran Ning Po" ("Peace and Calm"). All have strong Buddhist musical elements.

The Jade Buddha Temple performance troupe will perform two songs, and it has an orchestra.

The choir and orchestra have more than 70 performers, rehearsing every Saturday and performing regularly at the Jade Buddha Temple, especially during festivals, cultural and charity events.

The programs usually involve original compositions, says Master Shengjing. Noted local composers such as Lu Qiming and Tu Bahai have written works for the temple musicians. The temple has a new musical program every year.

Annual performances begin in January. The group has performed in Hong Kong and Taiwan, and traveled overseas to Malaysia, Singapore and Indonesia.