Kuala Lumpur, Malaysia -- It was certainly a night of wonder at the auditorium of Malaysian Tourism Centre in Kuala Lumpur a week before the end of 2007. 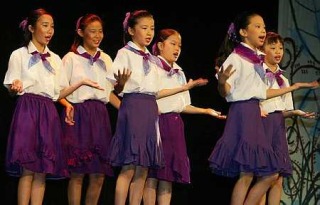 << Young voices: The Sunday Dharma School dancers, aged 12 and below, dancing to songs with simple and catchy lyrics inspired by Buddha's teachings.

The Subang Jaya Buddhist Association's Youth Section celebrated its 15th anniversary by holding an enchanting concert there with the delightful theme of “The Night of Wonders”.

Hundreds of people were there to enjoy the inspirational and charming cultural show put up by the obviously enthusiastic youths.  For the dedicated performers and the spirited audience, “The Night of Wonders” was surely a memorable evening of soul searching, life cleansing and heart nourishing experience.

They, for certain, drove home the profound Buddhist philosophy of the need for a harmonious lifestyle with fellow humans and nature to the very responsive and receptive audience, in a real refreshing manner.

The concert was enthralling with the inspired youthful performers' enthusiasm and creativity, with all items tightly bound together with the emcee Yin Zhen Yao's wits and antics.

Tourism Ministry secretary-general Datuk Dr Victor Wee and Kelana Jaya MP Loh Seng Kok were among those present at the concert.  “It's Winter Solstice today (Dec 22) and the Chinese are supposed to be eating sweet glutinous dumplings with family members. I am very happy that you have brought your family members here to this meaningful concert,” Loh said in his speech.

“The association has done a very good deed by providing a platform for the youths to parade their hidden talents, creative minds and even expanding their capabilities through performing arts, exhibitions and multimedia presentations,” he said.

“In today's world that is full of unhealthy elements, an event such as this concert definitely helps foster healthy fellowship, interaction and networking among the youths. It also encourages further development of positive values, which in turn contribute to nation building,” he said.

Loh also encouraged the youths to take on the challenge to be a civil servant, to add on to the number of Chinese civil servants in the country.  Wee, meanwhile, commended the Buddhist Association for its stable and reliable leadership.

Among the highlights of the concert were songs belted out by the D2Y (Dhammadutta 2 Youth) choir and dances by the Sunday Dharma School's primary students.

Dana Moult, 17, kept the crowd riveted with his hypnotising piano rendition of a Chinese-flavoured piece he composed when he was only 10.  Chuah Ken Ny entertained the audience with his mastery on the classical guitar.

A Buddhist music band calling itself the i.gemz serenaded attendees with some soothing tunes with lyrics inspired by Buddhist teachings.

The main presentation of the evening was a drama entitled “The Night of Wonders”, which told the tale of three friends who went on a search for a long lost treasure, but instead were on the brink of losing the friendship as greed and strife took their toll. Fortunately, a hermit was there to salvage the situation.

At the end of the concert, all those present certainly agreed that it was “The Night of Wonder”.