Kathmandu, Nepal -- A  Buddhist nun from Nepal who became a singing sensation in her own country and the west as well as an icon for hundreds of young Buddhist women will finally make her debut in India, the country from where her parents came. 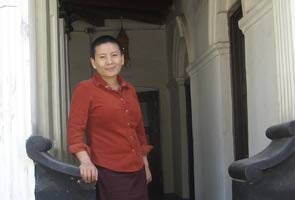 Ani Choying Dolma, a 40-year-old Buddhist nun of Tibetan ancestry, who took "asylum" in a monastery in Kathmandu valley at the age of 10 to escape the rages of an abusive father, is now one of the best-known singers in the country with followers in China, Hong Kong, Singapore, the US and Germany.

The daughter of a sculptor who first migrated to India from Tibet and then moved to Kathmandu with his wife, Choying was "discovered" by an American musician Steve Tibbits, who heard her crooning prayer songs in the Nagi Monastery and was struck by the purity and joy in the young voice.

He recorded her songs in Kathmandu and then mixed them with his own music to create an album which created a sensation in the US.

Choying's guru Tulku Urgyen Rimpoche, whom she credits with changing her from a battered young girl to a mature woman who learnt to forgive, approved of Tibbit's proposal that she do a singles album commercially, saying it would take the healing words of prayers to people. And thus "Cho" was recorded.

"Cho is a Tibetan word meaning to cut," Choying explains. "It means to cut away one's ego."

The success of the album, containing Tibetan prayer songs, led to music concerts in the US in 1998.

"I had always strongly felt that Buddhist nuns should also be given the same educational opportunity as the monks," she says. "I used to wish that someone would help us. But with the concert money, I realised we could do it ourselves."

On returning to Nepal, she registered the Nuns' Welfare Foundation and two years and several more concerts later, she had founded the Arya Tara School where today there are 69 young girl students.

"Though the school runs classes up to VIII, we have a tie-up with a neighbourhood school to complete the girls' school education and allow them to take the school leaving examination," Choying says.

"Today, there are three nuns from the school who are enrolled for higher studies in the Banaras Hindu University."

Ani Choying Dolma has 11 single albums with a new one to be launched in Kathmandu next month. It's based on the writings of Indian Vipassana guru Satya Narayan Goenka, who translated the teachings of the Buddha in Hindi.

Choying is entirely different from people's concept of a traditional nun. She drives a Chevrolet, jetsets all over the world for her concerts, and loves to hum vintage Hindi film songs. She is also a fan of Bollywood superstar Amitabh Bachchan, Gulzar and A.R. Rehman.

Though she has performed in Germany, Switzerland, Hong Kong and farther, Choying will sing for the first time in India Sunday, at the 3rd International Festival of Sacred Arts in the National Archives in New Delhi.

Besides Tibetan prayer songs, her recital will also include "Phulko anka ma", the Nepali song that became a rousing hit with its philosophy that he who saw life through the eyes of a flower regarded it as a bed of roses.