The Bodhisattvas of 'Qixia Temple 1937'

Singapore -- ‘Qixia Temple 1937’ is based on the moving true story of how the 1,500-year-old Buddhist monastery in Nanjing during the Japanese occupation became a refugee camp to thousands of Chinese, who would otherwise be without food, shelter and medicine. 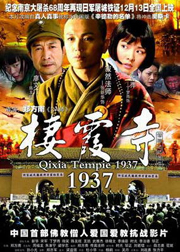 Despite trying to steer clear of the ongoing political upheavals in order to preserve the temple, the monks, led by Venerable Jiran, who was left in charge of the temple in the absence of its Abbot, realised that they could not turn a blind eye to the helpless laity, be they Buddhist or not. Over the period of four months, the makeshift refugee camp’s numbers swelled from a few hundred to some 24,000.

It was as if an impossible koan tp solve at first – to let in the refugees or not. Sheltering them would save lives, especially that of the young, old and injured, yet it might also endanger the existence of the temple itself, along with its monks.
Once the temple gates opened to all, it would be impossible to urge the masses to leave. As Venerable Jiran analyses, the temple should be both a physical and spiritual refuge for those in need – especially when lives are in danger. What good is a temple and its inhabitants for, if it only represents compassion, while not practising it? With so much speak of emulating the all-embracing compassion of Guanyin Bodhisattva, who heeds the cries of those in need to relieve their suffering, it was the very moment to do what they could.

Practising the Bodhisattva spirit, the monks would risk life and limb by venturing into the war zone to seek more medicine, as they rationed their limited food supplies for the thousands. There, they encounter an American filmmaker on the run, for having captured scenes of war crimes, who passes his footage to them for safekeeping. With a Chinese general and his men on the run from the enemy too, the temple thus became triply endangered for sheltering refugees, wanted footage and soldiers. As Venerable Jiran put it when advised by some hesitant monks not to hide the general, he too is a sentient being in need, whose life is endangered. Why should he not be embraced with compassion as well, especially for having defended the people too?

In a desperate measure to officially protect the refugees, Venerable Jiran declared the temple to be a refugee camp and registered all present, along with the writing of an open letter listing the atrocities done to them, including the rape, murder and the plunder of food. He even got everyone to sign to testify for the truth. However, this was largely ignored by the enemy, whom, in the rage of not being able to locate the wanted soldiers and footage, ordered the camp to be disbanded – or to face being bombed. Venerable Jiran was also openly stripped and tortured with cold water poured upon him in winter, to extort any secrets he might be withholding on the whereabouts of the wanted. Despite this, he remains silent and calmly accepts the pain.

A doctrinal error in the story is when he wonders if the Buddha was testing them, as the Buddha would never let senseless torture and killing happen in order to enlighten or liberate. What occurred was due to the collective karma of all present, even as wilfully expressed through the enemy, who thereby created new negative karma for themselves. All these, however, Venerable Jiran took in his stride, as he alludes to the good example of Earth-Treasury (Ksitigarbha) Bodhisattva, who is able to be unmoving, unwavering in his all-embracing patience and compassion like the great Earth. Under the cover of the funeral procession of a murdered monk, the general and his men managed to escape from the temple. The other error is the idea that one’s negative karma can be inherited by one’s children, though they can have similar karma. Parents also experience their own negative karma when they suffer from the anguish of seeing their children in pain.

In a poignant conversation with the enemy’ chief general, Venerable Jiran remarked that Buddhism is accepted by many due to its universal message of peace. That both China and Japan embraced Buddhism, and that the Buddha denounced all wars, he wondered why the two nations had to go to war. Fearlessly, he added that he could feel that the general was suppressing trouble in mind, as he was ‘forced’ by the ‘need’ to do his job that was against Buddhist principles. He shared that all of us have human-nature, which is rational and kind, versus animal-nature, which is capable even of killing one’s own kind. The Buddha urges the flowering of Buddha-nature, which is human-nature at its best!

As Venerable Jiran said, Qixia Temple had been rebuilt many times in its long and sometimes turbulent history. The essence of the Dharma that it stood for can never be destroyed. Venerable Jiran was an example of how a brave Bodhisattva should be – even in the direct face of fire. In case it is mistaken, this is essentially not a nationalistic story, but a story of how we can all be Bodhisattvas to one another!

Watch the above at the Asian Buddhist Film Festival: http://www.gv.com.sg/moviedetails/gv_moviedetails_the_2nd_asian_buddhist_film_festival.jsp