The Wu Xia Koan Of Forgiveness

Singapore -- ‘Wu Xia’ is an entertaining and nuanced study of the tension between the need for forgiving one who has resolved to turn over a new leaf, versus the danger of forgiving one who turns out to be thoroughly unrepentant. Since we cannot read minds, how do we know if someone truly deserves forgiveness or punishment? 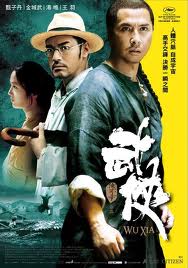 Exactly because we cannot tell with 100% certainty, we have to make a leap of faith, hoping that our judgements made with all our compassion and wisdom mustered in the moment is going to be correct. Even reserving a judgement when we need to make one is to make a judgement of sorts, for better or worse, for many a disaster in the world arose from plain apathy.

The film is sprinkled with light and healthy doses of Buddhism-inspired wisdom. There is a scene of farmers chanting ‘Om Mani Padme Hung’, the mantra of compassion, while they till the fields, knowing that they inevitably cause some deaths in the soil. And the protagonist (Liu Jingxi), who was an ex-serial killer turned vegetarian, speaks of interconnected causes, conditions and effects, of how people change, such that there is no fixed self-nature. He was hinting to the detective bent on investigating his ‘manslaughter’ of two trouble-making hardcore criminals, that he is no longer the person he suspects him to be, another wanted criminal. Is Jingxi now a hero or just one accustomed to killing? Is a criminal who takes down criminals a criminal too?

Jingxi had willingly let go of his past, but his past karma did not let go of him, as was the case of the most notorious serial-killer in the Buddha’s time, Angulimala, who was nevertheless stoned despite already having become an Arhat. His mind, being liberated, did not suffer from the abuse though.

Jingxi too graciously accepts and does what he can to make the best of his situation when negative karma catches up eventually. However, initially, as he was certain that he had truly left his murderous past behind, he was adamant in not wanting to admit he is who he was. Herein lies another question – how readily should you forgive yourself, to disconnect yourself from past mistakes, and to what extent? But if even you do not give yourself a second chance, who will?

However, the detective, having once made the bad judgement of letting a guilty boy go, who ended up poisoning his own parents, was haunted by the incident, and had no qualms in sticking to the letter of the law, to apprehend the guilty, no matter what their ‘excuses’ are. Purposely stifling his capacity for empathy, he thought that he could not afford any more mistakes. How much of our present judgements are based on our past experiences? Too much or too little? Or just right? Hard to tell! When he was shown a deserted shortcut by Jingxi, the latter had every opportunity to silence him… which he did not. This made him have some, yet inadequate second thoughts about reporting him to the authorities. It is not good to be evil, but it is also evil to be unforgiving to those once evil, who wish to be good now.

Is the law for justice or sometimes just vengeance? Would that be ‘criminal’? If the law does not allow men make good their lives, is it still good? The law is for protecting humanity, but is abiding by the law more important than being humane? Thus did the Buddha teach that there should be a Middle Way of skilful balance when it comes to abiding by the letter and spirit of his teachings. Wisdom needs compassion as much as compassion needs wisdom. Able to read his mind, the Buddha himself vouched for Angulimala, who had renounced his murderous ways, before a king, who came to agree that he should be spared.