A Buddhist priest seeks enlightenment on the silver screen

Monterey County, CA (USA) -- Rev. Jay Shinseki says there are spiritual lessons to be learned everywhere – even in the murky bogs of Degobah. Shinseki, a Buddhist priest with more than 30 years experience, is teaching a class at the Monterey Peninsula Buddhist Temple that explores Buddhist themes in movies. 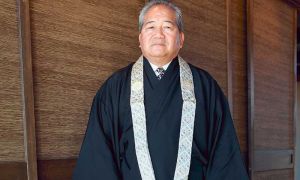 << Jay Shinseki has been a Buddhist priest since 1978. His Pure Land branch of Buddhism is widely accessible, he says: You don’t have to shave your head or be a vegetarian.

The film selection ranges from Star Wars(Degobah is home to the eternally wise muppet Yoda) to the mind-bending sci-fi classic The Matrix. Shinseki was born in San Jose, where he attended temple with his family, then later traveled to Japan to study the Pure Land school of Buddhism. He now leads a Sunday service at the Buddhist temple in Seaside. “Buddhism in the Movies” is held weekly every Tuesday at 7pm until March 25. More info at www.montereybuddhist.org.

Why study Buddhism in the movies?

I felt like I could reach a lot of different people by talking about Buddhism in movies. Also, I wanted to show that there are relevant Buddhist teachings in a lot of places in our lives.

What are some movies with Buddhist themes?

We’ve looked at the PBS special The Buddha, which was narrated by Richard Gere (who is a Buddhist). We’ve looked at [Bernardo] Bertolucci’s film Little Buddha starring Keanu Reeves and a movie by Martin Scorsese called Kundun. We’ve also looked at The Truman Show, The Matrix, Groundhog Day, I Heart Huckabees and a couple of [Akira] Kurosawa films.

What’s Buddhism got to do with Groundhog Day?

I’m a Kurosawa fan. One of his great movies is called Rashomon, a story that takes place at this old wooden gate. It’s about four people and their encounters, and how each one sees that encounter differently. It has a lot of great lessons.

The other one I like is The Hidden Fortress, also by Kurosawa. That story is what Star Wars is based upon. When [George] Lucas saw that film he took that story and made it into the first of the Star Wars movies.

There’s Buddhism in Star Wars too?

The very famous line of Yoda is, “May the force be with you.” The force is something he explains as something unseen that surrounds all things that encompass every aspect of our lives. This is what in our tradition we would call Amida Buddha, a force that is constantly coming toward us and teaching us about the truth of our lives. Amida is the Sanskrit name of wisdom and compassion that’s extended toward us. In Star Wars, it’s about Luke growing and learning about his true and real self through all of his experiences. In a way, it’s that force that helps him come to the realization of where he belongs in this universe.

Who is the most Buddhist character in Star Wars?

There are parts of every character that are very Buddhist. Yoda is one name that jumps out at us. Darth Vader, too. He’s someone who eventually comes to grips with his true self. Evil is sort of his life, it consumes him – this anger and this need for revenge – but in the end he becomes his true and real self again. He becomes Anakin Skywalker. It’s hard to say which one is the most Buddhistic.

What lesson do hope your students will take from your class?

I hope they get a good understanding of Buddhism. Buddhism begins with the life of a man who saw suffering, who had great compassion for those suffering and wanted to alleviate their suffering. It’s the story of a man who through his own efforts was able to achieve that. We also have that capability. There are ways of changing our life, from a life of greed and anger, to a life of compassion, caring and peace. The peacefulness of Buddhism is not far-fetched or something that cannot be achieved.

Movies can be like a mirror into the self. We tend to align ourselves with the characters – we like heroes, we don’t like villains. Yet without the opposing sides, the story is not there. We see ourselves in both characters, and Buddhism is all about looking at ourselves honestly.