Singapore -- The movie ‘Predestination’ plays heavily with the ‘predesination paradox’, which is also known as the causal or causality loop. This is a proposed curiosity of time travel, of how Event A can cause Event B (in the linear cause and effect sense), but because of time travel, Event B can cause Event A too (in the cyclical cause and effect sense). This suggests that time travellers are not really able to change the past, since history as we know it does not change, even if time travel is a reality. Then again, if it is possible, we would not know history had changed, since it would be written differently in the ‘first’ place, without another version or memory of it for us to compare with? 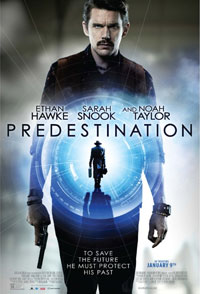 As an example of the paradox, Person A who travels to the past to save Person B might turn out to be the one who accidentally killed Person B, which later urges Person A to travel to the past to save Person B. Then again, if Person A already knows he killed Person B, why would he even want to return to the past to fulfil his role in doing so, time and again? Unless Person A was unmindful or forgotful of what happened. Is this not why history repeats – due to us not having learnt our lessons well, both as individuals and as the human race? The only way to break free of meaningless and even painful existential cycles is by cultivating sharper presence of mind!

If time travel is indeed possible and the past can be ‘changed’, because of the predestination paradox, such ‘changes’ would not genuine. Disturbingly, it suggests a form of ‘past-fatalism’, as if every time traveller who returns to the past is destined to be deluded of the futility, of even the best of intentions and actions to reshape the future. Yet, such efforts would not be truly futile as they are ‘needed’ to make the future present! Not that time travel is really possible as above, the possible function of the predestination paradox perhaps serves to deter us from looking wistfully into the past too much, so as to move on.

An agent from the Temporal Bureau travels to the past to prevent a serial terrorist bomber from carrying out further destructive acts. Spoiler alert! … Towards the end of the story, he realises that bomber is his future self, who travelled back in time to do the bombings. His future self ‘reasons’ with his younger self, on how his mass-killings actually prevent more deaths due to alternative interconnected futures of the people and places un/affected. This highlights a fundamental flaw in the Temporal Bureau’s rule – it demand minimal unnecessary changes of the past, while it requires its agents to save many in the past, which necessarily creates great changes in the future, for better or worse!

If time travel necessitates the predestination paradox to keep events causally in place, deliberate time travel is then a literal waste of time! We might as well live the present moment best we can to shape the future, instead of pining to ‘remake’ the past. The only fruitful way to make sense of the past is to imagine living it in kinder and wiser ways, and to actively make amends now. That would do. While the struggle to change the past might be futile, how we can diligently change ourselves in the present is not. It is a choice we keep making, with changing consequences. We have to make the best of our limited freedom now, to attain full freedom – from the cycle of rebirth!