"Hannah: Buddhisms untold journey" premieres in New York City at the Rubin Museum May 6, 8 and 9

New York, USA -- Hannah: Buddhism’s Untold Journey - the award-winning documentary by co-director/producers Marta György Kessler and Adam Penny which chronicles Hannah Nydahl’s story of bringing Tibetan Buddhism to the West-makes its New York City debut at The Rubin Museum of Art on May 6, 8 and 9. 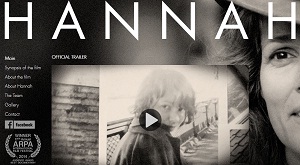 The film was edited by Sundance Grand Jury Prize and Emmy award-winner Simon Barker. Watch the official trailer via Vimeo HERE. The Rubin Museum of Art is located at 150 W 17th Street in New York City. Tickets and information can be found via rubinmuseum.org.

Filmed in India, Nepal, the Far East and Europe, Hannah is the untold true-story of a young Danish woman’s life, searching for greater levels of perception in the 1960s until as an adult, she becomes a pillar of living Buddhism with her husband Ole Nydahl.

In 1968, the two were the first Western students of His Holiness the 16th Karmapa in Nepal. After a period of study, they were sent back to Europe where they made his teachings of Tibetan Buddhism relevant for Western minds. Over the following 3 decades they travelled throughout the world bringing the teachings to all walks of life.

“Hannah is not just a story about an exceptional and brave woman,” says co director/producer Marta György Kessler, who spent 15 years traveling with Nydahl and some of the most renowned Buddhist Lamas. “It’s an adventure of historical significance with such a profound, rich narrative, it was important that we not just tell the story-but also really touch people with it.”

In 2006 Hannah was diagnosed with terminal lung cancer. She and Ole returned to Copenhagen to live out her last days together in the center they founded in 1974. Almost exactly three months after the diagnosis, Hannah passed away whilst in meditation with her husband and a few friends around her. In a ceremony in the summer of 2015, Hannah and Ole Nydahl will be awarded a UNESCO prize for their contribution to Dialogue, Coexistence and Peace around the world.

Adam Penny has worked in media for 12 years, producing documentaries, commercials and brand campaigns. In 2002 he produced his first feature documentary Movimento, about street children and the favelas of Rio for Channel 4. Other documentary credits include The Urban Chef for BBC2, World’s Youngest Daredevils for Sky and The Four Year Plan, a feature documentary following debt ridden football club QPR being taken over by billionaires. As Creative and Managing Director of Connected Pictures Adam has also worked on a vast array of campaigns for brands including Microsoft, SABMiller, British Airways, HSBC, Nissan and for agencies such as TBWA, Saatchi&Saatchi, CHI&Partners and Adam&EveDDB.

Marta was an actress in Hungary when she met Lama Ole and Hannah in 1990 and started to practice Buddhism. Since then she has lived and worked in different Buddhist communities around Europe. In 2002 she began to give lectures on Buddhism and has continued to do so in many different countries. Marta also travelled with Hannah and Lama Ole for more than 15 years all over the world. During this time she saw firsthand their activity and developed a very close connection to Hannah. In 2009 she came up with the idea to write Hannah’s life story, an inspiration that developed into this film. This is Marta’s first feature documentary.

Simon has been an editor for over 20 years. In that time he has worked on countless award-winning feature documentaries including Pussy Riot: A Punk Prayer (Special Jury Prize award-winner 2013), Google and the World Brain (Sundance award-nominee for Grand Jury Prize 2013), Reagan (Emmy award-winner Outstanding Historical Documentary 2012) and 9/11 Heroes of the 88th Floor (Emmy award-nominated Outstanding Informational Programme 2012).

Connected Pictures is a London-based production company, specialising in documentary and branded video content. Documentaries include The Urban Chef for BBC, World’s Youngest Daredevils with Mylene Klass for Sky as well as co-productions on Turing for Channel 4 and most recently The Four Year Plan.

They have been involved in campaigns for the re-launched British Airways, behind the scenes documentaries at the Cannes Film Festival, as well as work for SABMiller, Levis, Moet & Chandon, Footlocker, JD Sport, John Lewis, Nissan and many others. For more information see www.connectedpictures.com.