The Buddhist way of life in the Northeast

New Delhi, India -- What many know of Buddhism is Siddhartha Gautam and his awakening under a peepal tree. ‘BUDDHISM – A Living Religion in the North East of India’, a documentary directed by Bappa Ray tries to delve deep with interesting insights into Buddhism being practised in Sikkim and Arunachal Pradesh. 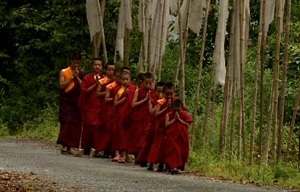 The documentary filmed over a year traces the origins of Gautam Buddha and the Mahayana branch of Buddhism. As a world religion, based on the teachings of Buddha or the ‘Awakened One’, in modern times, two major branches of Buddhism exist -- the Theravada in Sri Lanka and Southeast Asia, and the Mahayana throughout the Himalayas and East Asia.

From Ladakh and Himachal in the west to Arunachal Pradesh and Sikkim in the east, in small villages scattered throughout the areas bordering Tibet, are communities which have adopted the Buddhist way of life.

Ray tells Metrolife, “Buddhism spread from Ladakh to Sikkim, bordering Tibet in the remote areas.” The film follows the narrative tradition of story telling where the voiceovers lead the 60 minutes of the film. From the 7th century, Buddhism underwent radical changes, and new forms appeared which were called Mahayana and Vajrayana and Tantra.

The film shows the discipline combined yoga practice with highly complex ritualism, mixed with magic, and includes the worship of a large number of divinities. It also traces Padmasambhava, ‘the great master of tantra’, who introduced Tibetians to Buddhism’s Tantric form. His journey from Tibet to northeast India forms an interesting part of the film revealing Padmasambhava as more powerful to the Buddha and incarnated to transfer an esoteric doctrine called ‘Pemagatha’.

While Sikkim showcases the daily lives of the worshippers and the rich cultural heritage that still remains nascent, the artistic pagodas, symmetries, stupas, arts, crafts of the Buddhist tribe of Arunachal Pradesh have been captured in the second half of the film.

The film looks at the influence of Buddhism as a ‘Living Religion’, on the socio-cultural heritage. “Mainland India many times fails to look at northeast but they are close to nature, understand beauty and have a strong cultural heritage,” says Ray.