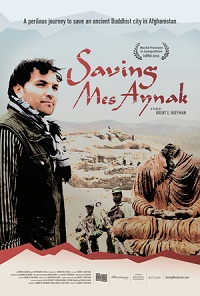 A Chinese state-owned mining company is closing in on the ancient site, eager to harvest 100 billion dollars worth of copper buried directly beneath the archaeological ruins.

Only 10% of Mes Aynak has been excavated, though, and some believe future discoveries at the site have the potential to redefine the history of Afghanistan and the history of Buddhism itself.

Saving Mes Aynak has been screened nationwide -most recently at Carnegie Endowment for International Peace. World wide, it is set to screen at the Louvre Museum through January.

It has been broadcast nationally in the US and in many other countries such Australia, Singapore, Japan and Italy.