by Prakash Kamat, The Hindu, November 24

PANAJI, India -- The Sri Lankan film industry is small and so are the budgets due to the small viewership, said Chathra Weeraman, director of the Sinhala film Aloko Udapadi (Light Arose), on Tuesday while interacting with the media at the 47th International Film festival of India (IFFI). 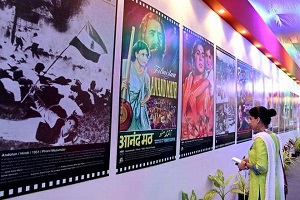 The director said his film on Buddhism was being dubbed in several languages as there are 41 countries where Buddhism is practised and the crew felt committed to deliver this significant yet lesser-known chapter of Buddhist history to them in their native language.

He said the film, his first, was completed under a budget of Rs.6 crore.

Responding to a question, Mr. Weeraman said that there were no collaborations planned for now, but as Buddhism in Sri Lanka’s history is connected to India, there could be co-productions on the same topic in the future.

Kogalla Nishantha, executive producer, said the the film will be released on January 20 in a number of languages. The film depicts a major milestone in the Buddhist timeline.

It is the story of human effort to preserve the spiritual heritage of Buddhisim for future generations of mankind, said Mr. Weeraman about the film, which was screened as part of the World Cinema on Monday evening.

Set against the background of events that took place 2,100 years ago and 454 years after the demise of Lord Buddha, the film is based on the facts found in Mahavansha, the chronicle considered to be the documented history of Sri Lanka. It also documents rock inscriptions across Sri Lanka and folklore about King Walagambha who, the director said, had not got due recognition in history.

Film-makers from the Republic of Korea and their 60-member-strong delegation, which also includes businesspersons, are keen on increasing co-productions with India and also to encourage improved relations between both countries.

A total of 18 films are being screened under the country-in-focus section at IFFI.

Director of the film, Tunnel, Kim Seong-hun said that it was his first visit to India. Mr. Kim said that Korea produces three films per year under co-production and has a budget of $300,000.

Director Lee Joon-ik of Dongju: The Portrait of a Poet, spoke about the removal of censorship in South Korea and its impact on the Korean film industry. He said that in the 1970s, Hollywood had eight per cent share in the Korean market, while Korean cinema only had a 20 per cent share. But, with the removal of censorship, Korean cinema has gained 30 per cent of the market share.

“We had around 40-60 films in a year in the 1990s, but with organising of a fund to promote film production in 2000, we today have over 230 films per annum,” said prominent film producer JangWon-seok.

Director of Film Festivals C. Senthil Rajan said that the South Korean delegation at the 47th IFFI was the largest delegation of a partner nation attending the festival in its history.
TOP