New Delhi, India -- The world’s most loved sci-fi saga has religion at its core, borrowing themes from several Buddhist principles and concepts 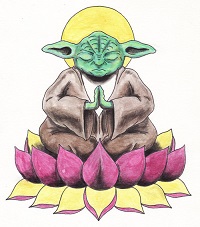 Star Wars can be a religion in itself. Not only because of its global cult like following, or the inspired significant dates and phrases, but also owing to the several underlying spiritual themes packed in the action adventure saga. It’s no co-incidence as the creator, George Lucas, specifically intended to deal with religious issues.

Lucas had been mulling over questions relating to religion from a young age and the making of Star Wars was a way to bring some of them to a conclusion. In an interview from 1999 he said, “The conclusion I have come to is that all of the religions are true; they just see a different part of the elephant. Religion is basically a container for faith. Faith is the glue that holds us together as a society. It is a very important part of allowing us to remain stable -remain balanced.”

I am a recent convert to The Force. I always wanted to watch Star Wars but mostly to find out what the hype was about. Amidst the excitement around the release of The Force Awakens last year, I decided it was a good time to mark the earlier six movies off my list and began in chronological order.

A practicing Buddhist for close to seven years, I was hooked as soon as I recognised the Buddhist undertones. Some of the Buddhist principles I had been studying made more sense when Yoda dispensed the wisdom, and concepts became clearer when Anakin Skywalker struggled with trials similar to those described in Buddhist sutras.

Soon I was looking beyond the CGI and was more interested in the lessons I could take back. This year, as is ritual now, I’m on another marathon, albeit in serial order, preparing for the December 16 release of Rogue One: A Star Wars Story. And this time I took notes.
Latter Day of the Law

The situation of turmoil that The Phantom Menace opens with, and its increasing severity towards Revenge of the Sith, is not very different from the Latter Day of the Law as described in the Lotus Sutra, the last set of teachings preached by Buddha before he passed on to parinirvana. It is an age of confusion in which people are tainted with the three poisons of greed, anger, and foolishness.

Buddhism itself loses the power to lead them to Buddhahood, much like we see Yoda bemoaning how the future is clouded. The Buddha predicted that the Latter Day of the Law would feature corrupt priests and dishonest monks. We see the same happening with Jedi Knights who have slipped over to the dark side. On arrogance, Yoda says, “A flaw more and more common among the Jedi. Too sure of themselves they are. Even the older, more experienced ones.”

Devil King of the Sixth Heaven

When the Jedi council hear the mention of a Sith Lord for the first time, their initial reaction is that of disbelief. They believe they would have predicted the appearance but Yoda retorts saying, “Hard to see, the dark side is.” Much like the Devil King of the Sixth Heaven described in the Lotus Sutra, which is considered to be the most difficult hindrance to overcome in one’s Buddhist practice. It is believed that as the Bodhisattva advances in his practice, hindrances and obstacles arise in confusing forms on his path to deter him. As Anakin progresses in his training as a Jedi, his trials become more elusive when he has to battle arrogance and attachment, which he is unable to recognise as they arise in him.
Mutual Possession

The Buddhist concept of Ten Worlds list the various life conditions, from Hell being the lowest to Buddhahood being the highest that human beings and the world at large constantly possesses. The state of Hell is different from that believed by Christianity; it is instead a state of agony that one feels in one’s current form instead of a place one is doomed to after death for sins committed during life.

On the other side of the spectrum is Buddhahood, a state of calm, again in one’s present form, and not a heaven gifted after death for good deeds performed in life. According to the principle of Mutual Possession of the Ten Worlds as described in the Lotus Sutra, no matter what state one is in, the other nine continue to exist in a latent condition. In Buddhahood, there still lies the potential for Hell.

Arrogance and attachment are seen as weaknesses by the Jedi and Buddhists alike. Although Jedi Knights reach the pinnacle in terms of their knowledge of The Force, there always lies the possibility of them giving in to the Dark Side, as is seen when Anakin Skywalker succumbs and turns into Darth Vader. But even the darkest pit of Hell possesses the potential for Buddhahood, as is seen in Luke’s belief that despite crossing over to the Dark Side, there is still good in Vader.
TOP