"Charlie and the Chocolate Factory" of Familial Enlightenment

Singapore -- Based on Roald Dahl's book, "Charlie and the Chocolate Factory" is a children's classic. However, if you watch the movie mindfully, you will discover that it is not merely a story for kids; it's a clever "two-way" moral tale which reconciles conflicts between parents and children while praising the value of family-bonding. 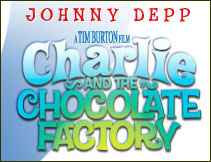 Willy Wonka (played by Johnny Depp) is the eccentric chocolate genius who lost faith in his parents and people in general. He decides to hold a lottery of sorts by including five golden tickets in his famous chocolates. The children who find them get an exclusive tour of his amazing secret factory. A final winner chosen among the five gets the unannounced special prize of inheriting his factory.

The five kids who got initiated into the factory by Willy reminds me vaguely of the first five disciples of the Buddha, who got the first "taste" of the Truth (in this case, the truth of how the factory worked). However, only a boy called Charlie (played by Freddy Highmore) proved worthy. The other four bratty kids present a spectrum of character flaws. The first is too greedy, the second too spoilt, the third too arrogant and the fourth too intelligently presumptuous. In all cases, along with the children's self-established "nature", we see how their parents played a part in "nurturing" their negative tendencies. This stresses the interpendent importance of both the children's willingness to learn from their mistakes and their parents willingness to teach them about their mistakes.

The good-hearted Charlie symbolised the underdog and underprivileged who makes good. As echoed several times about winning a golden ticket, "Everyone has a chance!" Not only did he win a ticket to the factory, he won the entire factory. The unseen golden ticket under the chocolate wrapper reminds one of the Lotus Sutra's parable of the precious gem hidden in the hem of a poor man's clothes. The gem symbolise the unrecognised treasure of one's Buddha-nature or potential for Buddhahood. Even an ordinary boy like Charlie, can discover this universal gem! One does not have to be rich or powerful.

"Everyone has a chance!"

Charlie's virtues first show when he realised that the golden ticket he won could used for the betterment of his family's living conditions. Like a self-sacrificial Bodhisattva to his family, he suggested selling it instead of using it for himself to fulfill his dream of visiting the factory. But equally big-hearted was his family, who encouraged him to go for the unique experience of a lifetime - that something "as common as money" cannot buy. Likewise, the experience of Enlightenment is priceless and cannot be bought.

Being "lured" to the factory can also be seen as a parallel to another parable in the Lotus Sutra - the story of the creation of a magic city in the middle of a desert as a "halfway house" - for its travellers to look forward to reaching, to take a break, before encouraging them to make the rest of the journey to the final destination. This city is an analogy for the goal of self-liberation with the true endpoint as Buddhahood, which entails the aiding of others to liberation along the way. Likewise to the city being a means and not the end, the invitations to visit the factory had the real agenda of finding an heir for it.

Which brings to mind yet another parable from the Lotus Sutra - that of the return of the "prodigal son", who did not recognise himself as the son of the man he worked with, not knowing he is the chosen heir who will inherit his father's full wealth, which is symbolic of the attainment of the wisdom of full Enlightenment.

Somewhat a material Pureland of sorts, the factory is inhabited by the race of identical looking tiny people called the Oomos-Loompas ("all" played by Deep Roy). The citizens of Pureland happen to be described in the sutras to look equally magnificent due to their great merits and their mindstate of equanimity! However, willing to work to satisfy their constant craving for cocoa beans (used for making chocolate), they do not realise they are trapped in in the factory by their own greed. A colourful paradise for candy-craving kids, even the rivers and grass in the factory is edible! But as exemplified by the four children who sullied the factory with their attachment, aversion and delusion, a place is indeed only as "pure" or paradisical as the mind is pure. With his simple and sincere state of mind, Charlie ended up as the only child who really enjoyed the visit.

The boon and bane of technological mechanisation is also explored as Charlie's father (played by Noah Taylor) loses his simple but repetitive job (of screwing caps on tubes of toothpaste) to a machine that could do it faster. The production rate had to be increased as more kids had tooth problems from eating too much chocolate - in the hope of winning the golden tickets. A neat little example of the interconnecting and interdependent effects of our actions! Eventually, Charlie's father becomes the repairman of the machine that replaced him! Personal human effort is thus never wholly replaceable - be it for worldly matters or spiritual cultivation, no matter how much technology advances.

In a scene of bad humour suggestive of cruelty to animals, the kids see a cow suspended in the air being "whipped" and milked at the same time - so as to produce "whipped cream". Do you know that most cows have anaemia because they do not suckle enough as calves from their mothers? Do you know that the milk literally stolen from them come to us consumers? Do you know that most male cows are killed at birth because they are not considered productive enough as they cannot produce milk? Do you know that after their lifetime of production, dairy cows inevitably end up as steak and leather? Cow milk calcium is also not the ideal for humans (as compared with sources such as deep green leafy vegetables) as it has excess calcium that can cause health complications. White chocolate (as differentiated from dark chocolate, which is milk-free and healthier) contains milk from cows, which unbeknownst to many, can cause problems from lactose-intolerance too. (Please see www.milksucks.com for details.) Looks like chocolate is not so an innocent a treat after all. The idea that eating chocolates release endorphins which give feelings of wellness is also dangerous for physical and mental health - if one becomes addicted (like the greedy fat kid in the film)!

Initially believing that parents can never be supportive of one's dreams, and will only "stifle creativity" by telling you what to do and not do, Willy ran away from his father (played by Christopher Lee) as a kid, eventually setting up his successful chocolate empire. Charlie helps Willy to realise that his estranged perfectionist dentist father, who once had him fixed with horrific teeth braces while disallowing him from eating any candy, always held him in his heart. To his father's surprise upon checking his teeth, they were the most perfect he had ever seen, though Willy never followed his instructions of flossing all these years! This seems like the movie's subtle way of telling parents that despite the best of their intentions and worst of worries, sometimes their children turn out totally fine!

This balances the parent-child equation of children often misunderstanding their parents' "tough love" as hatred and punishment (as exemplified by Willy's case). In the end, Willy and Charlie share the fruits of their factory labour with their families. The familial bliss they tasted was simply sweeter than any chocolate in the world!