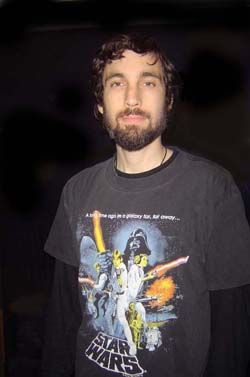 << Buddhism teaches that the first Truth of life is that suffering is a part of life. For me nothing makes the fact of suffering more evident than the “Holiday Special”...

The link between the Buddha and Luke Skywalker and Co. has been made by writer Matthew Bortolin. Indeed, these are twin passions: Bortolin is an ordained member of Thich Nhat Hanh's Order of Interbeing, and has lived in Buddhist monasteries both in the United States and abroad. And a set of Jedi robes hangs in his closet.

Bortolin has outlined the unlikely common ground between these two cultural phenomena in his new book “The Dharma of Star Wars.” Covering the entire “Star Wars” odyssey from the 1977 landmark through the upcoming “Revenge of the Sith” (albeit with one notorious exception, which is discussed later), Bortolin traces elements of Buddhist philosophy and theology in the epic story lines and larger than life characters of the “Star Wars” films. Released by Wisdom Publications as part of the build-up to “Revenge of the Sith,” Bortolin’s

“The Dharma of Star Wars” brings a very different and deeply compelling analysis of the galaxy far, far away.

Film Threat caught up with Bortolin at his Ventura, California, home to talk about his book and its unique considerations.

Were you initially cognizant of the parallels between “Star Wars” and Buddhist theology when you first saw the 1977 landmark, or did your connections between faith and film arise over time? And what exactly clued you to the connections?

When I saw “Star Wars” in 1977 I didn’t even know what Buddhism was and I probably wouldn’t have cared had someone told me it had parallels with my favorite movie. I was simply captivated by Luke’s quest, Obi-Wan’s wisdom, Vader’s evil and the rest of the crew. “Star Wars” instantly became part of me, my thoughts, my world-view. I think of it now as my oldest friend. “The Empire Strikes Back” made the influence of Buddhism on the saga very apparent. Irvin Kershner (the director of The Empire Strikes Back) said he tried to make Yoda like a Zen master and to imbue the Dagobah scenes with a Zen feel. (By the way, “Dagobah” is a rewording of “dagoba” or Buddhist shrine—just a little geeky trivia for you). Yoda is a good jumping off point for Buddhist themes in “Star Wars,” but they run much deeper than what that little Jedi Master taught Luke. 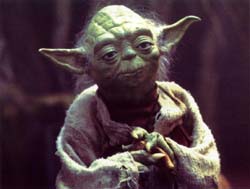 << "Yoda is a good jumping off point for Buddhist themes in 'Star Wars,' but they run much deeper than what that little Jedi Master taught Luke..."

Star Wars fans have more than a little difficulty tolerating the likes of Jar Jar Binks or the Ewoks. What role do these less-than-loved characters serve in the Buddhist understanding of the Star Wars series?

If nothing else they teach us that the greatest saga of all time can be terribly flawed and still retain its perfection. We can still enjoy the garden despite the weeds—and we can enjoy the weeds too. Even as a kid I found the Ewoks’ victory over an entire legion of the Emperor’s best troops implausible, but I still spent hours recreating that epic battle with my Ewok Village playset. Yub, yub!

Jar Jar…now that’s a different story. In “The Dharma of Star Wars,” I liken Jar Jar to that fidgety, erratic, spastic nature of our minds. He is our mind when it is running on and on and won’t shut up no matter how many times we yank it by the tongue and order it to quiet down! Jedi Mindfulness and meditation help calm the Jar Jar within us (and yes, he’s there whether we want to admit it or not).

Millions of people are obsessed with “Star Wars.” But is there a danger, from a Buddhist perspective, in putting too much energy and emotion into a movie series?

Yes, there is always a danger in becoming overly obsessed with anything. For example, I was at the midnight showing of Attack of the Clones in LA three years ago and a fight broke out between fanboys over some prime seats. A real fight with fisticuffs and toy lightsabers! We can become overly attached to ideas, things and people (like Anakin’s attachment to Padmé in “Revenge of the Sith”) and that attachment can lead to the dark side (again, like Anakin in “Sith”). At the same time, however, it is also dangerous to overly repudiate or reject life. “Star Wars” is fun—I say enjoy it (sans the black eyes and swollen lips, of course).

Your book makes no mention of the notorious 1978 offering The Star Wars Holiday Special. Can one find any Buddhist understanding in having the likes of Art Carney or Beatrice Arthur recklessly trespassing in the Lucas universe?

Buddhism teaches that the first Truth of life is that suffering is a part of life. For me nothing makes the fact of suffering more evident than the “Holiday Special” and especially Beatrice Arthur singing the Mos Eisley Cantina patrons out the door. Just the memory makes my skin crawl. I have “watched” the “Holiday Special” several times, but I have never made it all the way through without firmly depressing the fast-forward button through most of its interminable, stomach-churning scenes. In an early draft of “The Dharma of Star Wars” I did reference the “Holiday Special.” I’ll repeat what I said there: If you haven’t already seen the “Holiday Special,” don’t!

Or for that matter, why is it that the Wookies have their own religious holiday in “The Star Wars Holiday Special” while the human characters don’t seem to have any visible affiliation with a specific religious persuasion?

By tapping into the archetypes of myth and religion but not being passionate about any one in particular, George Lucas dressed a highly spiritual saga in secular clothes. There is no specific “Star Wars” faith. “Star Wars” is a story of the human condition that we can all relate to in one way or another. Buddhism, as an individual practice, a practice of self-discovery and one that requires us to understand the truth about reality in our own way, squares nicely with Lucas’ universal approach. Buddhism is not just for the Buddhist. It can be practiced by anyone, anywhere, anytime.

What are your personal expectations of the upcoming “Revenge of the Sith”?

I think it’s going to be awesome! I am confident that it will be the best of the prequel trilogy and perhaps the entire saga (although it will be hard pressed to outdo “The Empire Strikes Back”). Darth Vader is my favorite character and I am excited to see the final fall of Anakin and the rise of Vader. Anakin’s story is one many of us can relate to. It’s a story of good intentions that go terribly awry because life is not simple and choices between right and wrong are often blurred. There is a saying about good intentions: “The road to hell is paved with them.” That is something Anakin discovers in “Sith.” We create hells everyday in our lives because we are also confused. Buddhist practice helps clear the confusion so we can see life with greater clarity and make choices that will benefit ourselves and others and not lead us to the dark side.