Los Angeles, USA -- By titling his documentary about the life of Tibetan Buddhist monk Gendun Choephel Angry Monk, director Luc Schaedler sets out to deliberately set a tone for the contradiction inherent in his film. One does not, after all, normally think of a monk, especially a Buddhist monk, as "angry". 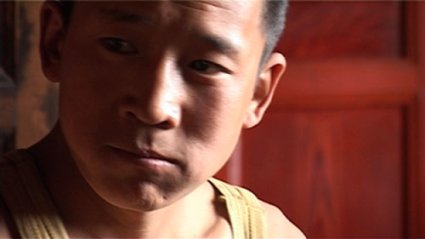 There is another layer of contradiction in this film as well, though. Schaedler is critical of what he calls "conservative" Tibetan culture - those members of the Tibetan community who struggled to maintain the traditions of Tibet and who resisted the influence of outside influences on their society. In his film, however, Schaedler paints a narrow and one-sided view of both Choephel and Tibetan culture.

Choephel, born in 1903, was believed to be a reincarnation of a Buddhist lama. In his narrative, Schaedler provides this information almost dismissively, but the belief in reincarnations of lamas is an integral part of Tibetan Buddhism and Tibetan culture. The Dalai Lama living today, for example, is the Fourteenth incarnation of the Dalai Lama, and was identified as such at the age of two through a series of tests to determine his authenticity.

As a Westerner, Schaedler doesn't have to hold the same beliefs as Tibetan Buddhists, of course, but as a filmmaker documenting and criticizing a culture he has studied, he says in the director's notes, since 1988, one might expect him to not be quite so blase about a belief that is an integral part of that culture.

Choephel was sent, as many Tibetan boys were and still are, to a monastery at the age of four, to begin his training as a monk. Choephel was a bright student who questioned everything, and as he grew older he came to question more and more whether Tibetan culture was stagnating because of the refusal of the Tibetan government, largely controlled at that time by the monasteries, to learn about and integrate knowledge from other cultures.

In 1934, after studying as a monk for most of his life, Choephel left the monastery to travel to India. He recorded his travels and his impressions of new lands both in writing and in drawings, researched both ancient Buddhist texts and modern history extensively, and began to write about Tibet, its political history, and the need for change and integration of the ideas of other cultures.

The film is constructed to mirror the path of Choephel's travels, with archival footage blended with modern footage that, quite often, mirrors the historical images. We are guided along the path of Choephel's life and travels by a voiceover narrative (annoyingly written in the first person, which made it difficult at times to figure out whether the narrative was talking about the past or the present), interspersed with interviews from Tibetans who actually knew (or at least had met) Choepel. The interviews are the best part of the film - they paint a portrait of a very bright and complex man who struggled against the bounds of tradition, and who was much more open than many of his time to learning new things.

Choephel's wife, who lived with him only a couple years after his release from prison, notes that he probably would have lived longer had he not drank so profusely, and says that at the end, he had deteriorated into a monster.

Schaedler maintains on the one hand that Choephel remained a Buddhist his entire life, while on the other presenting us with interviews that totally contradict this: his excessive drinking and frequenting of brothels during his travels - his traveling companion claims in an interview that Choephel bragged about "screwing five or six women a night" - and especially his deterioration following his three year imprisonment by the Tibetan government. After his release, Choephel was despondent and would not go to the temple. In one interview it is recounted how, when Buddhist scholars came to question him, Choephel blew smoke in the face of a Buddha statue and bragged of dousing a Buddha statue in beer. This kind of behavior may be angry, all right, but it's very far from the ideals of a Buddhist, much less a Tibetan Buddhist monk.

Schaedler clearly has an agenda with this film to push his own ideal of a free Tibet. What he overlooks, however, is that the monks and the nuns and the monasteries are also an integral part of Tibetan culture. Before Buddhism came to Tibet, Tibet was historically a feared and war-mongering country that frequently raided other countries. The history of Tibet itself is very much about the pull of violence on one side and peace on the other. Schaedler could have done more justice to an overall perspective on Tibetan culture in the film by not deliberately excluding the point of view of the Fourteenth Dalai Lama or from Tibetan Buddhist monks and scholars with a different perspective than the scholars he chose to interview, who all, oddly enough, mirror Schaedler's own views on the necessity of preventing Tibetan culture from "stagnating".

In his zest to make a different kind of documentary about Tibet, Schaedler goes too far in showing only the point of view that bolsters his own opinion, which ultimately weakens the film. As a result, Angry Monk becomes less a film about Gendun Choephel, the monk, the man, and the scholar, and more a film that uses Choephel's life as a metaphor to drive Schaedler's view on the politics of Tibet.