"A History of Violence" - Fact in Fiction

Singapore -- The multiple award-winning film "A History of Violence" is one tense and tautly written story - as much disturbing as it is realistic and thought-provoking. "The past never dies... unless you kill it." 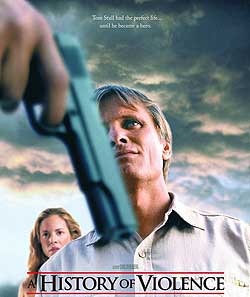 Ominously reflected in the tagline of the graphic novel it was adapted from, it tells of how on how a single moment of violence from the past can send ripples far beyond itself - rebounding back in the future with drastic effects which threaten to stir up even more irretrievable ripples.

Living in a quiet rural neighbourhood, Tom Stall (played by Viggo Mortensen of "The Lord of the Rings" fame) appears to be a peaceable man on the street. Indeed, it is peace that he seeks and maintains, as he hides from a dark past, of his previous unlawful streaks of violence inflicted on the equally lawless. One night, his heroic saving of his diner from robbers unwittingly draws attention from past enemies who noticed him on national television. He had swiftly gunned down the robbers in an instinctual act of defense. This episode echoes a troubling truth about the power of the media. Like a surgeon's knife, it can cut both ways - for better or for worse. Ironically, media portrayal of violence to renounce it can further aggravate violence from those who feed from it. The depiction of violent heroism can also encourage unwarranted self-righteousness.

Tom thus finds his painstakingly "reborn" life shattered, as his past karma catches up in the form of vengeful enemies who stalk him. He tries to make a peace pact, but to no avail. In his words to his main enemy (played by William Hurt), "I'm here to make peace. Can I do anything to make things right?" He receives a cruel unforgiving reply, "You can do one thing - you can die." Violence inflicted begets violence... in one way or another, from the party involved, or karmically from another avenue. Thus did the Buddha utter that "Hatred does not cease by hatred, but only by love; this is the eternal rule." But here comes the spiritual challenge - what if your love and compassion is not enough to move the enemy? Whatever your decision is, it will either perpetuate or end the hatred... some of it at least, if not totally.

To safeguard his new life, Tom's predicament leaves him almost "choiceless", but to respond to the renewed violence from his past demons with even more deadly violence. Virtually all his known enemies were eventually killed by the desperate Tom. In a way, Tom was truly repentant, yet he had to choose the wrathful "Bodhisattva" path for the bigger picture, to selflessly safeguard his family from ruthless gangsters. But what about the deceased's families? One wonders if Tom's conditionless surrender to the law or his enemies for his past violence would had saved him and his family? Would it had touched and transformed his enemies? Would that have been wiser, or more foolishly dangerous? In the sometimes counter-intuitive words of the Buddha, "One is not a great one because one defeats or harms other living beings. One is so called because one refrains from defeating or harming other living beings." Yes, the Bodhisattva path is not always easy. At its furthest stretch, it can even mean risking one's life for the greater good.

A history of violence begins from one single moment of violence. "A History of Violence" is a microscopic look at how violence disturbs a single person's life, and how it extends macroscopically to the world at large. It is the story of how the personal history of our violence plays a part in the overall history of humankind's violence. What kind of role do we play in history? A benevolent or a malevolent one? For better or for worse? Some extra "food" for thought - what about the often dismissed violence that we as consumers mindlessly and passively inflict on animals day in and out for our selfish consumption?

The film also depicts how violence affects us on subtler levels - it is not always plain physical aggression - it can even be in the way we harshly communicate, be it to family or strangers. Upon discovering his son's (played by Ashton Holmes) outburst of violence at school at a bully, Tom slaps a disbelieving Jack in a fit of anger - when he retorted that he was simply settling a problem with violence like his father did. It is worth reflecting - will Tom's violent approach truly awaken Jack on the wrong use of violence? Or will it only perpetuate it in defiance?

In another scene, we see Tom having frustrated angry sex with his shaken wife (played by Maria Bello), as contrasted to gentle love-making in an earlier scene. It was as if his violent streaks have resurfaced with the emergence of his enemies. It is interesting to note that sex and violence have always been featured in films as recurrent aspects of human nature and behaviour. But at times, they can be "one". This reminds one of the name of "the evil one" in Buddhist cosmology - "Mara" - which means the embodiment of both "desire and death" - of which "sex and violence" is linked to! Are we too suppressing our Mara (inner demons) like Tom did?

Tom had concealed his violent history from his family as a skilful means to protect them out of love, though ironically he was also seen as lying by the very ones he sought to protect. In wishing to gain trust, he lost much trust. Do we live unfortunate double lives too? How can we be more true to ourselves and others? Open to the possibilty that Tom was like the schizophreniac Dr Jekyll and Mr Hyde, his wife wondered who was more real - the peaceful loving family man she loved, or a violent criminal that is within him? The truth of imperonality discovered by the Buddha tells us that there is no fixed self in the first place - we are nothing but a bundle of fluxing habitual tendencies that we cling on to. Who are you now? Who would you want to be?

The film ends on an electrically-charged mood, as a worn out Tom returns late to his family for dinner, after the seemingly final spate of killing during a showdown with the last of his enemies. The family was unsure whether to wait for his return, as they sat in uncomfortable silence, uncertain of where he has been and what to say to each other. Was the violence truly final? Or will they be haunted in time to come... by a freshly bloodstained past? We do not know - but what we do know is that their lives have thus changed forever. Will there be more peace now, or more violence? As the family reunites and reconciles silently, we know the open future is very much up to them, as much as ours is up to us. The past never dies... unless you "kill" it? Not true - we only need to face our disturbing past in the present with the best of our compassion and wisdom. Be it their world, yours or mine, may our one world steadily progress to the end of its bloody history of violence.