Singapore -- Dubbed Jet Li's most important and final martial arts epic, "Fearless (Huo Yuanjia)" is a study on the true meaning of victory. With such hype over the film, one would expect Jet Li (who plays the Chinese title character) to outdo his pugilistic skills in his previous features, in which he already fought spectacularly and invincibly in. 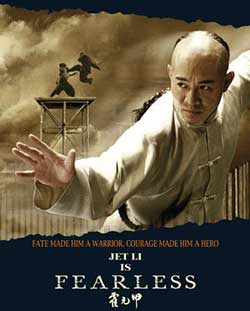 Surprisingly, in "Fearless", not only did he not win his usual victories effortlessly, he suffered a crushing "defeat" at the end, but not while emerging a true victor in spirit. Though a semi-fictitious dramatisation of the life of Huo Yuanjia, who was the historical restorer of the glory of Chinese martial arts, the film is peppered with timelessly true Buddhist lessons. Being the most Dharma-filled film of Jet Li, a practising Buddhist in real life, I could see why he saw it as his most important film. With more Dharma lessons than "Shaolin Temple" which propelled him to fame, Jet Li, who holds and uses prayer beads during filming breaks seems to have grown spiritually.

Weak and asthmatic at a young age, Huo Yuanjia was often bullied. Comforting the resentful boy who craved to master martial arts to defeat his enemies, his mother gives him a pep talk on the purpose of martial arts... The most powerful aspect of practising martial arts is not its ability to defeat others, but its ability to conquer one's craving for victory. Martial arts are for strengthening oneself and helping others; not for bullying or vengeance. It is through respect that respect is won, and being feared is different from being respected! Unfortunately, these crucial lessons fell to deaf ears, as the boy retorted that though he is too weak to learn martial arts, martial arts can strengthen him. With much perseverence, he did conquer his physical limitations, and became an undefeated martial artist, though yet to defeat his demon of pride. As the Buddha taught, "Though thousand times a thousand in battle one may conquer, yet should one conquer just oneself, one is the greatest conqueror." Being his own greatest enemy, the only one he truly needed to defeat was himself.

With quick and vicious strokes in the arena, he did not realise that his bursting pride and lack of restraint was a karmic time-bomb waiting to explode. Spurred by impetuousness over an assumed wrong, he manslaughters a man in a duel without knowing, whose vengeful servant then kills his family. A case of violence reaping violence, for how can violence end violence? This brings to mind the Buddha's teaching that,"Hatred can never be ceased by hatred; hatred can only be ceased by love." In seeking vengeance for his killed family, Huo Yuanjia confronts his opponent again, only to realise he was already dead, and grieved over by a family as grievious he is over his. (Incidentally, recent news reports say Huo Yuanjia's has living descendents.)

Repentant and disillusioned, he renounces his home and status like a wandering ascetic, and drowns himself thoroughly in his sorrows. Rescued by a kind village girl, he retreats to the countryside, living the simple life as he reflects upon the folly of his ways. Learning to be less restless and more mindful, he even learns to pause while planting in the fields - to meditatively savour the moment whenever greeted by the wind - with arms wide open! He also learns that saplings do not grow well when sown too closely together - a reflection of the need of mutual respect for harmonious co-existence to be possible.

During a tea session with a fellow martial artist upon his return home as a spiritually transformed person, Huo Yuanjia has a profound conversation with him. When asked whether he understood the grades of tea, Huo Yuanjia replied that it is not that he does not know tea, but that he does not wish to differentiate it into superior or inferior grades, since tea is just tea. When stressed upon that tea indeed has different grades, he asks, "What is inferior or superior, since tea simply grows naturally without differentiating?" To the reply that he truly does not know tea due to his inability to differentiate its qualities, he relents and says, "You are right - so the grade of the tea is not what it tells me, but decided by us.

Good contesting then, is not for discovering which form of martial arts or who is superior, but to discover oneself's spiritual weaknesses - since our real opponent is oneself. Thus, the most frightening and challenging contest is always within oneself, as we confront our inner demons. Finally putting his skills to good use, Huo Yuanjia fights to restore the pride of the nation. It is natural for the Buddhist audience to reflect on whether he symbolised the collective ego of the Chinese, who were then heavily disparaged by invasive Westerners as "Sick Men of the East", though Huo Yuanjia had already curbed his ego to a large extent. Is it alright to fight for national pride?

Perhaps, as long as nations are full of the unenlightened, having some national pride is "natural" and "healthy". But, as in the case above, this pride should not become arrogance and lord over other nations' dignity. In this sense, Huo Yuanjia fought the good fight for the greater good. It was a sincere request for the end of bullying, without resorting to bullying.

Poisoned by his enemies banking on him to lose, he became weak in his final battle, yet mindful enough to refrain from delivering a death blow - out of mercy... before collapsing. However, touched by his sportsmanship and grace, and the realisation that he was injustly poisoned, he was declared the winner by his opponent, as he passes away to a cheering crowd gone wild. What does it mean to be fearless? True fearlessness is not just the boundless drive to win others, but the courage to face loss, even if it is something as "fundamental" as the loss of one's pride or something as dear as one's life. In this sense, the Buddha, who has realised the illusion of ego and transcended the boundaries of life and death, is a truly fearless hero!

The story imagines Huo Yuanjia having a final vision of himself gracefully practising martial arts in the countryside, finally at peace with the world, at peace with himself. In the continuing spirit of Huo Yuanjia, who founded the Jin Wu Sports Federation, he still inspires through its branches worldwide. Perhaps in a parallel way, Jet Li's film aims to inspire its audience worldwide. Jet Li in person is a socially-engaged Buddhist involved in humanitarian and Dharma projects. Please see www.jetli.com and www.one-foundation.com for more information about his vision and how you can help.