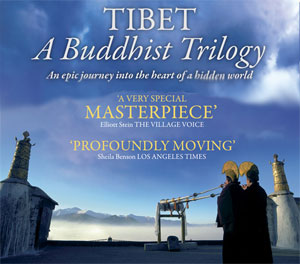 Los Angeles, USA -- Graham Coleman’s 1979 epic documentary “Tibet: A Buddhist Trilogy” has been restored and re-released, offering a new generation the opportunity to view the intricacies and epiphanies of the exiled Tibetan community’s celebration of their ancient Buddhist faith. Filmed on location in India and Nepal, the film provides a stunning view to the extraordinary survival of a religious culture.

The first part of the trilogy, titled “The Dalai Lama, The Monasteries and The People,” provides a straightforward view of the Dharmsala, India, headquarters of Tibet’s government in exile. The Dalai Lama is both the spiritual and political leader of the Tibetan people, and his eloquence and piety are displayed with quiet grace.

Whether offering the names for newly-born infants or addressing his people on the 20th anniversary of the 1959 Tibetan uprising against the Chinese Communist occupation, the Dalai Lama is a fascinating study in calm and strength. The chapter also details the intellectual debates within the Buddhist monasteries, which are a glorious mix of wit and cerebral cunning.

The second part, “Radiating the Fruit of Truth,” is filmed at a monastery in Nepal and details the ancient protective ritual called “A Beautiful Ornament.” This segment may challenge many viewers, given its leisurely pacing and its decision to offer commentary via subtitles rather than narration (which was used in the first chapter), but its insight into Buddhist culture and theology is peerless.

The third part, “The Fields of the Senses,” offers a heartbreaking view of death within a monastery and the community’s response to the loss of life. Words cannot properly describe the ethereal experience captured on film here – it must be seen to be truly appreciated.

In the years since the film’s initial release, the situation in Chinese-occupied Tibet has worsened as the Beijing regime works furiously to erase the Buddhist influences from Tibet and to isolate the Dalai Lama from the world community. Yet the Tibetan society continues to thrive (at least in exile) and the return of “Tibet: A Buddhist Trilogy” provides an invaluable reminder of the peaceful and intelligent society which remains in exile while the brutal Chinese occupation remains in place. This is one of the most important films of the year, and it deserves to be seen by as many people as possible.